EU leaders tell May there will be no Brexit renegotiation 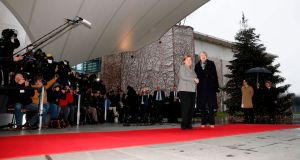 Jean-Claude Juncker started the day in Strasbourg telling MEPs there was “no room whatsoever for renegotiation” of the Brexit withdrawal treaty. “The deal we achieved is the best deal possible, it is the only deal possible,” he said.

And the European Commission president finished it last night reiterating the same message to British prime minister Theresa May.

Mrs May had a whistlestop tour of capitals – The Hague, Berlin for lunch, and Brussels – to lobby for some softening on the treaty’s backstop language, but got the same message from Dutch prime minister Mark Rutte, German chancellor Angela Merkel and the president of the EU Council, Donald Tusk.

She will speak to Taoiseach Leo Varadkar and Austrian prime minister Sebastian Kurz on Wednesday. Austria has the rotating presidency of the EU.

All were on message on Tuesday: if they can help “clarify” aspects of the deal then they are happy to do it, but there will be no renegotiation.

Following her meetings, Mrs May told Sky News she believed the leaders were “determined to deal with this issue”. She said of the backstop that it was “a necessary guarantee to the people of Northern Ireland, but we want to know that it is temporary if it is brought into use”.

Long and frank discussion with PM @theresa_may ahead of #Brexit summit. Clear that EU27 wants to help. The question is how.

She insisted that the withdrawal deal honoured the result of the Brexit referendum , and was “the best deal available, indeed the only deal available”.

Dr Merkel told a meeting of CDU deputies that no one wanted the backstop to be in effect forever. On the contrary, she said, the EU had an interest in ensuring that the UK left the customs union with the EU and concluded its own free trade agreements. “She said that the backstop was ‘until and unless’,” said one deputy.

“And maybe,” the chancellor is reported to have said, “there is a way of making that a bit clearer somehow, to reassure MPs in Westminster.”

As Mrs May arrived in Berlin, an amused Dr Merkel looked on as her chancellery staff struggled to open the prime minister’s still-locked car.

After their meeting, the prime minister headed to the British embassy for a 20-minute meeting with Annegret Kramp-Karrenbauer, new leader of the ruling, centre-right Christian Democratic Union (CDU).

In Strasbourg, Mr Juncker said he was willing to provide the prime minister with “further clarification” to prevent the return of a hard border between Northern Ireland and the Irish Republic.

Mrs May made clear in her speech in the House of Commons on Monday her understanding of the need for and commitment to a backstop to protect the frictionless Border. But the absence of a unilateral right to exit the backstop is causing her real problems which may not be solved by a declaration that simply clarifies the agreed process.

The European Parliament’s lead Brexit negotiator, Guy Verhofstadt, said there would be “no problem” for the EU to change the parallel non-binding political declaration on future relations if that would help ensure that the backstop would never be used.

“If [Mrs May] is looking in the political declaration for a closer relationship with the EU to avoid the use of this backstop, there will be no obstacle,” he said.

That’s not quite what she has in mind.