‘Toxic’ US interior secretary to resign amid investigations 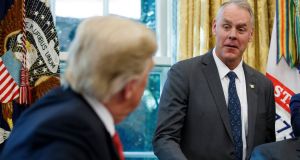 US president Donald Trump listens as US secretary of the interior Ryan Zinke delivers remarks during a meeting with workers in the White House in Washington. File photograph: Shawn Thew/EPA

US interior secretary Ryan Zinke, who has sought to open US offshore waters to oil and gas drilling despite environmental protests, will be leaving his post at the end of the year, president Donald Trump said on Saturday.

Mr Trump did not give a reason for the latest high profile departure from his administration. However, Mr Zinke, a former Navy Seal and ex-congressman from Montana, has faced multiple investigations into his use of security details, chartered flights and a property deal.

“Ryan has accomplished much during his tenure and I want to thank him for his service to our Nation,” Mr Trump said on Twitter. “The Trump administration will be announcing the new secretary of the Interior next week,” he added.

Mr Zinke (51) was among Mr Trump’s most active cabinet members, cutting huge wilderness national monuments in Utah to a fraction of their size and proposing offshore oil drilling in the Arctic, Pacific and Atlantic. He became a darling of the US energy and mining industries and a prime target for conservationists and environmental groups.

Secretary of the Interior @RyanZinke will be leaving the Administration at the end of the year after having served for a period of almost two years. Ryan has accomplished much during his tenure and I want to thank him for his service to our Nation.......

.......The Trump Administration will be announcing the new Secretary of the Interior next week.

Senate Democrat leader Chuck Schumer applauded Mr Zinke’s departure in a tweet: “Ryan Zinke was one of the most toxic members of the cabinet in the way he treated our environment, our precious public lands, and the way he treated the govt like it was his personal honey pot.”

“The swamp cabinet will be a little less foul without him,” Mr Schumer said.

In July, the interior department’s Office of Inspector General began investigating a Montana land deal between a foundation Mr Zinke set up and a development group backed by the chairman of oil service company Halliburton Co, which has business with the department.

In late October, that investigation was referred to the US justice department for a possible criminal investigation, according to multiple media reports. The department of justice and the interior department have declined to comment.

There are two other continuing investigations of Mr Zinke’s conduct. The department’s watchdog is examining whether the department purposefully redrew the boundaries of Utah’s Grand Staircase-Escalante National Monument in a way that would benefit a state politician who owns adjoining property.

The watchdog also is investigating Mr Zinke’s decision to block casinos proposed by two Connecticut Native American tribes. Critics allege he made that move, overruling his staff’s recommendation, shortly after he met with lobbyists for MGM Resorts International, which owns a new casino in the region.

Earlier this year, the department’s inspector general wrapped up two other investigations relating to Mr Zinke’s travel expenses. Those investigations found that a $12,000 (€10,600) private flight he took after a meeting with a professional hockey team could have been avoided and that the security detail he took on a family vacation to Greece and Turkey cost taxpayers $25,000.

Mr Trump said on November 5th that he would look at the allegations. Previously, the president had repeatedly praised Mr Zinke’s performance.

Mr Zinke was a first-term congressman from Montana when Mr Trump chose him to lead the interior, a sprawling department that employs more than 70,000 people and oversees more than 20 percent of US territory.

His departure makes him the ninth cabinet-level official to leave a post since Mr Trump took office two years ago. – Reuters