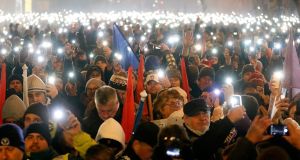 Budapest braced for another anti-government protest on Monday night, after thousands of Hungarians rallied outside the headquarters of a state broadcaster that they accuse of pushing prime minister Viktor Orban’s nationalist propaganda.

Several opposition deputies spent Sunday night inside the state television building and tried unsuccessfully to secure a chance to broadcast a list of key demands, before two of the politicians were forcibly ejected on Monday morning.

One of them, independent deputy Akos Hadhazy, quickly called a new demonstration at television headquarters, as some of the biggest protests against Mr Orban’s eight-year rule showed no sign of abating.

They were sparked by parliament’s decision last week to raise from 250 to 400 hours the amount of annual overtime that employers can demand from staff, which critics have dubbed the “slave law”.

For many protesters, however, this is just the latest affront from a populist government that has amassed almost unchecked power, demonised liberal opponents, NGOs and migrants, and fallen out repeatedly with the European Union, while failing to tackle failing public services or major corruption.

Also last week, parliament approved the creation of new administrative courts to handle sensitive issues like elections, protests and graft in public contracts, which will be overseen by the justice minister and tighten government control over Hungary’s judicial system.

The demonstrators’ demands include abolition of the “slave law”; guarantees that courts and public media will be independent; and Hungarian membership of the EU prosecutor’s office to allow outside scrutiny of corruption cases.

Chanting “We’ve had enough” and calling Mr Orban “Viktator”, protesters marched several kilometres through an icy Budapest on Sunday night to state television, which they denounced as a “factory of lies”.

Amid minor scuffles, some of the crowd threw missiles and fireworks at massed ranks of hundreds of riot police, who responded with occasional bursts of tear gas as the deputies negotiated for airtime inside.

After being manhandled out of the television centre on Monday morning, Mr Hadhazy urged people to gather there again in the evening, for a protest he called: “They threw us out of the door, so we’ll go back in through the window.”

Amid growing concern for the rule of law in Hungary, Mr Hadhazy tweeted: “We are walking on unknown roads now. The illusion of the consolidated democracy has shattered in Hungary. I just hope this is not the way of (Vladimir) Putin and (Recep Tayyip) Erdogan,” in reference to the Russian and Turkish leaders.

Istvan Ujhelyi, a member of the European Parliament for Hungary’s Socialists who was also inside the television building, said “the long-term goal is to change the government but that won’t happen overnight”.

“As opposition, we hope to remain united and put our differences aside in order to form a united front against the increasingly authoritarian and totalitarian Orban regime,” he told The Irish Times.

“Demonstrations are organised against the government in general, so at this stage it is hard to predict where the anger and desperation of protesters will lead.”

Amid a labour shortage in Hungary, Mr Orban says the overtime law simply allows those who want to work longer to do so.

Gyorgy Schopflin, a member of the European Parliament for Mr Orban’s Fidesz party, called the protests “an overwhelmingly Budapest phenomenon”.

Pointing to polls that show Fidesz is still by far Hungary’s most popular party, he said the demonstrations “won’t make a dent in its will to stay in power unless they reach a critical mass”.

In previous years, protests have prompted Mr Orban to scrap an internet tax and a possible bid to host the Olympics, but Mr Schopflin said the current rallies would need to become much bigger to force Fidesz to drop the overtime reforms.

“I don’t see this as a crisis now,” he said in a telephone interview.

Some officials claim liberal philanthropist George Soros is behind the protests, having previously accused him of funding migration into Europe and forced a renowned university that he funds to move most courses out of Hungary.

A spokesman for the Budapest-born billionaire’s Open Society Foundations said: “To suggest that the protestors are being manipulated rather than exercising their right to free expression is an insult to Hungarians and a sign of Orban’s desperation to deflect attention from his corrupt regime.”