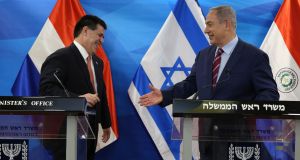 Israel is closing its embassy in Paraguay and recalling its ambassador from Asunción to protest against Paraguay’s decision to move its Israeli embassy from Jerusalem back to Tel Aviv.

Paraguay’s decision to move its embassy back to Tel Aviv is a significant diplomatic blow for Mr Netanyahu’s government, coming just months after the South American nation had relocated its embassy to Jerusalem, becoming the third country to do so – after the United States and Guatemala.

Israel believes the decision to relocate to Tel Aviv was made due to Arab pressure, combined with a promise of future investment deals. It comes just weeks after president Mario Abdo Benítez was sworn in as the country’s new leader.

Mr Abdo Benítez defended his decision as part of an effort to support “broad, lasting and just peace” among Israelis and Palestinians.

“Paraguay is a country of principles,” Mr Abdo Benítez tweeted.

Mr Abdo Benítez belongs to the same conservative party as his predecessor Horacio Cartes, who inaugurated Paraguay’s new embassy in Jerusalem. Mr Abdo Benítez was president-elect at the time the embassy was moved and made clear that he did not agree with the decision.

‘Right side of history’

PLO secretary general Saeb Erekat urged Guatemala to also “stand on the right side of history” and move its embassy outside Jerusalem.

The status of Jerusalem is one of the most contentious issues in forging a peace deal between Israel and the Palestinians, who seek east Jerusalem as the future capital of a Palestinian state. Israel captured the eastern part of the city during the 1967 Six-Day War.

In December, US president Donald Trump recognised Jerusalem as Israel’s capital, reversing decades of US policy and sparking fury in the Arab world. Washington inaugurated a new embassy in Jerusalem on May 14th. Guatemala and Paraguay followed suit, raising optimism among Israeli officials that a dozen countries would move their diplomatic missions from Tel Aviv to Jerusalem.

“We have only one capital and no other capital: a united Jerusalem.”

“Diplomatic relations should not be founded on tantrums; despite Paraguay’s unfortunate decision, it must not be used as a pretext for cutting diplomatic ties.”