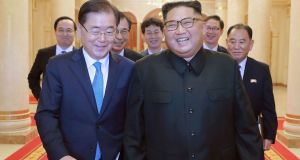 Diplomatic stalemate on the Korean peninsula appears to be wearing on Kim Jong-un, with the North Korean leader expressing “frustration” that the global community is not taking Pyongyang’s efforts towards denuclearisation seriously.

The 35-year-old dictator told a visiting South Korean envoy that he was irked by the lack of recognition for his goodwill measures, such as the closure of North Korea’s nuclear test site and the apparent dismantlement of a missile launch pad.

The comments suggest that Pyongyang now wants the US to offer concessions, such as a declaration ending the officially unfinished Korean war, to get diplomacy back on track.

The two sides have been stuck in a stalemate since Mr Kim met US president Donald Trump for a historic summit in Singapore in June.

The stand-off has been exacerbated by the publication of intelligence reports suggesting North Korea has continued to develop its long-range ballistic missiles and nuclear weapons capabilities.

“Kim Jong-un wishes that international circumstances will change such that he can believe his decision to relinquish nuclear weapons was the right one,” said Chung Eui-yong, South Korea’s national security adviser, who met the dictator in Pyongyang on Wednesday.

“He said the declaration to officially end the Korean war has nothing to do with weakening the South Korea-US alliance and the withdrawal of US troops from South Korea, ” added Mr Chung, alluding to such concerns in Washington. Mr Chung added that Mr Kim had told him that he still had trust in Mr Trump and had never spoken ill of the US president, as well as repeating a pledge to work towards the denuclearisation of the Korean peninsula.

But after months of negotiations, such rhetoric is ringing increasingly hollow. North Korea has itself said it would always “preserve our nuclear science”.

“There is clearly a cultural difference behind the gap of perception towards the measures taken by North Korea so far. Mr Kim thinks he has shown enough sincerity for his denuclearisation will by closing down the nuclear test site and the missile test site, but the US thinks they are just superficial gestures,” said Lee Seong-hyon, a researcher at the Sejong Institute.

“Mr Trump should try to narrow this gap of perception with North Korea by sending some positive messages to North Korea and taking some symbolic goodwill gestures.”

The US president responded to Mr Kim’s comments later on Thursday by thanking the North Korean leader for his “unwavering faith in president Trump”.

“We will get it done together,” Mr Trump tweeted in comments that highlighted his relatively conciliatory approach towards Pyongyang – which contrasts with the tougher stance favoured by members of his own administration.

Neither of North Korea’s apparent goodwill concessions were subject to external inspection and verification. Many scientists believe the nuclear test site was already wrecked by radiation before its official dismantlement in May.

Seoul, meanwhile, hopes it can bridge the gap between Pyongyang and Washington.

South Korean president Moon Jae-in will travel to the North Korean capital between September 18th and 20th for his third high-level summit with Mr Kim.

“Kim Jong-un said he is willing to take more active steps on denuclearisation if there are some correspondent measures to North Korea’s previous goodwill measures,” said Mr Chung.

Kim Tae-woo, former head of the Korea Institute for National Unification, threw doubt on Pyongyang’s latest rhetoric, saying the regime had not taken any meaningful steps towards denuclearisation.

“It just demolished the entrance to its nuclear site. But it keeps producing nuclear materials. And although it started dismantling the missile site in early August, there has not been much progress since,” he said. – Copyright The Financial Times Limited 2018