The Japanese island of Hokkaido has been struck by a 6.7 magnitude earthquake, leaving the island without power and triggering a landslide. Video: Reuters 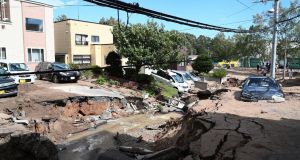 A car is stuck on a road damaged by an earthquake in Sapporo, Hokkaido prefecture on September 6th. Photograph: Jiji Press/AFP/Getty Images

Officials said at least 366 people were injured, five of them seriously, with another 30 unaccounted for after the magnitude 6.7 earthquake jolted residents from their beds at around 3am (7pm Wednesday BST).

Nearly three million households were left without power by the quake — the latest in an exhausting run of natural disasters for Japan.

The tremor paralysed normal business on the island, as blackouts cut off water to homes, immobilised trains and airports, caused hundreds of flight cancellations and shut down phone systems.

In the town of Atsuma, where entire hillsides collapsed, rescuers used diggers and shovels to search for survivors under tonnes of earth that tumbled down steep mountainsides, burying houses and farm buildings below.

The landslides ripped through some homes and buried others. Some residents described awakening to find their next-door neighbors gone.

The island’s only nuclear power plant, which was offline for routine safety checks, temporarily switched to a back-up generator to keep its spent fuel cool.

Nuclear regulators said there was no sign of abnormal radiation — a concern after a massive quake and tsunami in March 2011 that hit north-east Japan and destroyed both external and backup power to the Fukushima Dai-ichi nuclear plant, causing meltdowns.

Japan’s Meteorological Agency said the quake’s epicentre was 24 miles deep, but it still wreaked havoc across much of the sparsely inhabited island.

Many roads were closed and some were impassable. Broadcaster NHK showed workers rushing to clean up shattered glass and reinstall ceiling panels that had fallen in the region’s biggest airport at Chitose.

Japan is used to dealing with disasters, but the last few months have brought a string of calamities.

The quake came on the heels of a typhoon that lifted heavy trucks off their wheels and triggered major flooding in western Japan, leaving the main airport near Osaka and Kobe closed after a tanker rammed a bridge connecting the facility to the mainland.

The summer also brought devastating floods and landslides from torrential rains in Hiroshima, as well as deadly hot temperatures across the country.

Japanese prime minister Shinzo Abe said that up to 25,000 troops and other personnel would be dispatched to Hokkaido to help with rescue operations. – AP