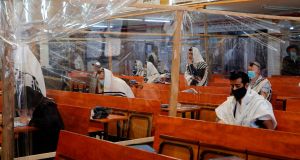 Israel begins a three-week lockdown on Friday, the eve of the Jewish new year, in an effort to curb the second coronavirus wave which has seen the country emerge with the highest daily infection rate in the world per capita.

The sweeping lockdown may be extended beyond 21 days if there is no significant reduction in infection rates.

Due to differences amongst ministers, the final framework of restrictions was agreed to only on Thursday. There was harsh criticism over the widespread exemptions permitted by the government, which many health experts believe will make the closure less effective.

“I consulted with all the senior officials and asked them whether there is a chance that the infection rate will go down under these conditions,” health minister Yuli Edelstein said. “To my great disappointment, I did not find anyone who was optimistic.”

He urged all sectors of society to cease asking what is and isn’t allowed “and instead ask themselves, ‘What can I do so we will see a drop in infection rates?’”

Prime minister Binyamin Netanyahu returned from Washington on Wednesday night after attending the White House ceremony normalising relations between Israel and the United Arab Emirates and Bahrain but had no time to celebrate what is perceived in Israel as a major diplomatic achievement.

Public disgruntlement, confusion and anger are running high. The rapidly-changing decisions to apply and lift restrictions, coupled with exemptions in response to political pressure, have continued to undermine confidence in the government.

Many secular Israelis are using the expression “lockdown for the secular”. They are angry that pressure from religious coalition partners means that synagogue services will be permitted for the new year, Yom Kippur and the week-long Sukkot festival, which all fall during the lockdown. Supporters of Mr Netanyahu are angry that the weekly protests against the prime minister are continuing, with thousands of participants, outside his Jerusalem residence.

“We’re locking the healthy and the sick in together. After the lockdown we’ll have new super-spreaders.”

President Reuven Rivlin apologised to the public for the fact that the country’s leadership has disappointed the citizens who had counted on it during the coronavirus crisis.

“We did not do enough to be deserving of your attention,” he said. He told the government it had to do everything possible to restore personal, health, and financial security to the citizens.

“This is a second chance, and we must win, because we may not have a third chance,” he warned.

Two of Israel’s largest hospitals are opening their underground medical wards, set aside for time of war, as designated coronavirus facilities.