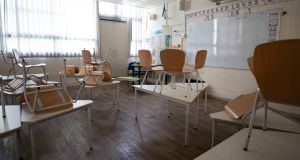 An empty primary classroom in Israel which has closed its schools as part of a lockdown in Tel Aviv. There have been 13 outbreaks of Covid-19 in Irish schools since September which have led to some classes being as to self-isolate. Photograph: Sebastian Scheiner/AP

A total of 35 cases of Covid-19 have been identified after students at 96 schools were tested, according to the Health Service Executive.

Some 2,100 staff and students have been tested at day zero and day seven after symptoms, HSE chief executive Paul Reid has said.

Children aged up to 10 years accounted for 17pc of all tests carried out in late August, rising to 36 per cent in the first week of September. However, the proportion of positive tests dropped by half to 0.5 per cent.

With a 39 per cent increase in positive cases over the past fortnight, Mr Reid said the trend in new cases was “consistent, rising and concerning”.

If we stay on the current path, things “will only get worse”, he said.

Equally, though, it would not be good for the health service to go back to lockdown, he said.

There are now 73 cases in hospital including 14 in ICU, the highest level since mid-June.

Hospitals were beginning to see wards “frozen” due to virus cases, thereby impacting their capacity as winter approached, while some nursing homes are struggling to find staff.

Mr Reid urged people to “take stock”, to “think as if you were a positive case”, wear a mask, radically reduce their social contacts and follow public health messages as part of the national effort to curb the rise in cases.

Separately, figures contained in a weekly report on coronavirus clusters compiled by the Heath Protection Surveillance Centre show 13 confirmed outbreaks in schools since they reopened.

A breakdown of the 2,679 positive Covid-19 cases recorded between September 2nd to September 15th show that children still account for a very small proportion of overall cases.

It was a different picture among teenagers: 15-25 year old accounted for 22 per cent of cases, the highest of any age group.

The figures come amid warnings from a teachers’ union that delays getting Covid-19 test results may make it unsustainable to keep schools open.

The Teachers’ Union of Ireland (TUI) has called for teachers and other school staff to have guaranteed access to a test on the day that they first experience possible Covid-19 symptoms.

The HSE has said that median Covid-19 testing and tracing times for positive cases in the community are in excess of three days.

The union said teachers were experiencing delays in accessing testing and receiving results, which meant teachers affected were unable to attend work.

It warned that the situation will worsen in the coming weeks and months unless action is taken now.

Michael Gillespie, the TUI’s general secretary said: “ This is not sustainable if schools are to remain open. Given traditional trends in terms of colds and flu over the winter months and the additional burden that will be put on any testing regime, it is certain that the problems we are seeing now will greatly worsen unless a robust testing system is put in place.”

He said school principals were finding it “extremely difficult” to recruit substitute teachers at short notice to replace those teachers who are awaiting either tests or the result of tests.

A survey carried out among principals last month found that 98 per cent had experienced difficulties employing substitute teachers in the previous 12 months. This trend is continuing in the new school year, he said.

“When appropriate substitute cover is not available, students experience a diminished education service,” he said.

“In economic terms, we believe that the additional investment required to make the testing system fit for purpose would be money well and wisely spent and would be offset by savings in terms of required substitution cover.”

Data released by the Health Service Executive (HSE) show that the median end-to-end turnaround time for community cases where Covid is detected is 3.5 days. This has come down from 3.9 days in the last seven days.

Experts recommend that the entire process should take no more than three days, and ideally closer to two days.