Coronavirus is out there, seeding widely, and things will get worse 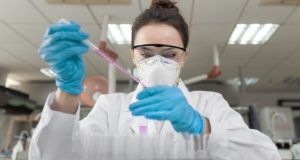 Testing and contact tracing is working better than before, despite higher demand. File photograph: Getty

The first thing to remember in relation to current Covid-19 trends is that things will get worse before they get better. The virus is out there, seeding itself widely, and this will translate into new cases and, to some extent, further hospitalisations and deaths in the weeks to come.

Any further restrictions designed to effect control over the situation will also take some weeks to have an impact.

Public health officials at Wednesday’s briefing by the National Public Health Emergency Team sounded a clear alarm about the spread of the disease, and backed this up with detailed information about these trends.

So much for cases. The average number of daily cases is 210, compared to a high of 537 in mid-April. We are testing more than we did in the spring, and therefore picking up a greater proportion of infections than we did then, so the comparison is slightly misleading. But only slightly, given the current exponential growth pattern.

The average age of cases is much lower than during lockdown, so generally outcomes will be better; for the vast majority of patients this will be a mild illness and some may not feel it at all. Yet the rise in cases among older people, which started in late August, could have serious knock-on effects for the health service.

Worryingly, the number of patients hospitalised has grown five-fold since the end of July, though it remains a fraction of the figure back in April. We have yet to learn how serious these cases are, but the number of people admitted to intensive care has remained stable until recent days. There has been a small increase in deaths.

The news is not all bad. Just a small fraction of the new cases are occurring among schoolchildren, teachers or retail workers, for example. Our staycation summer does not seem to have driven transmission in counties reliant on tourism. Testing and contact tracing is working better than before, despite higher demand.

We still do not know enough about what is driving the current surge. There is an increase in sporadic cases and an increase in household outbreaks, but how is the virus being introduced into households - from other households or different settings?

Virus levels in the worst affected parts of Dublin are as bad as it ever got earlier in the year. Dublin North-West’s current 14-day incidence of 161.8 per 100,000 population compares to a national incidence of 155 in mid-April and close to 200 in Kildare when it had its surge.

These trends point to the need for restrictions in Dublin on inter-household mobility and travel, while education and shops could be spared further measures.

While the temptation in the past has been to reach for another “blunt instrument” in the form of restrictions, a more tailored approach would address specific sectoral or geographical “hot-spots”. Is there enough testing of key workers such as home helps and healthcare workers, for example? Is the health message getting through to young people? Are we following up with incoming travellers to ensure they are self-isolating?

The experience elsewhere show that a hundred small steps can work just as well as a sledgehammer approach in curbing the spread of the virus.