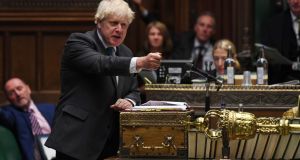 Boris Johnson during PMQs in the House of Commons on Wednesday. Photograph: Jessica Taylor/UK Parliament/PA Wire

Boris Johnson has moved to defuse a Conservative backbench rebellion by promising MPs a vote before he reneges on parts of the Brexit withdrawal agreement. Dozens of Conservatives were poised to back an amendment to the UK internal market Bill that would require a vote in the House of Commons before its clauses which breach international law are invoked.

Mr Johnson met some of the rebels in Downing Street on Wednesday to agree a compromise that would satisfy their demand. The Bill returns to the Commons next week when MPs will debate the clauses that give British ministers the power to override parts of the Northern Ireland protocol.

Richard Keen, the government’s advocate-general for Scotland, resigned on Wednesday after Northern Ireland secretary Brandon Lewis suggested he had misled the House of Lords about the Bill. Lord Keen told the Lords on Tuesday that the Bill did not breach international law and that Mr Lewis had “answered the wrong question” when he told the Commons last week that it did.

“I gave a very straight answer to parliament last week in line with the attorney-general’s position,” Mr Lewis told the Northern Ireland Affairs Committee on Wednesday.

“My position is absolutely in line with the legal advice that the attorney-general put out.”

Mr Lewis said he had “read out something very specific” to ensure that he was giving the House a straight answer when he was asked if the Bill would break international law. He declined to say if Britain would abide by rulings under the withdrawal agreement’s arbitration mechanism, saying it would be “unhelpful and dangerous” for him to do so.

South Belfast SDLP MP Claire Hanna was among the committee members who criticised the government for threatening to contravene the protocol.

“Do you understand why people cannot trust your government and do you have any handle on the anxiety and the unease and the instability that your government is creating every day in Northern Ireland?” she said.

The prime minister told the Commons liaison committee that he would only use the power in the UK internal market Bill to break the withdrawal agreement in extreme circumstances. He said he did not believe the EU was negotiating in good faith – contradicting Mr Lewis, who said a few hours earlier that it was.

“It’s always possible that I am mistaken and perhaps they will prove my suspicions wrong,” Mr Johnson said.

The prime minister said he still hoped it would be possible to reach a deal with the EU, adding that a no-deal scenario is not what either side wanted.

“Therefore I have every hope and expectation that that won’t be the outcome,” he said.