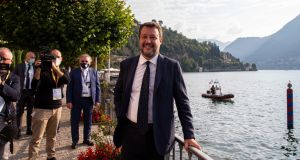 Italy’s ruling Democratic party is facing a watershed moment this weekend as it contemplates losing control of a region seen as one of the spiritual homes of the Italian left to Matteo Salvini’s anti-immigration League.

With seven of Italy’s 20 regions going to the polls on Sunday and Monday, of which the left controls four, the PD is girding itself for possible defeat in the central region of Marche and in Puglia in the south, although polls suggest it will hold on in Campania, home to Italy’s third-largest city, Naples.

But it is the party’s threatened defeat in Tuscany – a so-called regione rossa since the end of the second World War – that would prompt the greatest PD soul-searching and mark a further reshaping of Italy’s political landscape, in which the left is learning it can no longer rely on automatic support.

“The comparison could be the loss of support in northern England for the British Labour party,” said Giovanni Orsina, a politics professor at Rome’s Luiss University, referring to the Conservative party landslide in the UK’s 2019 general election. “These are regions that traditionally were strongly left wing, and in the past voted communist, but are now increasingly moving towards the right.”

A victory in Tuscany for Susanna Ceccardi, the 34-year-old League candidate fronting a right-wing coalition, would further underline Salvini’s transformation of the former northern separatist party into a broader electoral force.

In January the PD, which governs Italy in coalition with the anti-establishment Five Star Movement, only narrowly fought off a ferocious election campaign by Salvini in one of its most populous strongholds, Emilia-Romagna. Last October the party lost control of Umbria, a historically left-wing region bordering Tuscany, to a League candidate.

Polls for this round of regional contests suggest PD candidate Eugenio Giani and Ceccardi are neck and neck in Tuscany.

The League was attempting to harness national concerns over immigration and the economy to galvanise its support in the region, Giani told the Financial Times.

“I want to focus on Tuscan problems, not national ones,” he said. “The current Tuscan model works. We are a beautiful region, a wealthy region, and we have many regional projects that promote solidarity for the less well off. We can improve things, but we do not need to change everything like the League are proposing.”

But Giani faces two obstacles: Five Star is running a candidate against him despite being a coalition partner at national level, potentially splitting the left-wing vote. And he is a new candidate, with regional PD president Enrico Rossi standing down, so cannot rely on the power of incumbency.

While the PD has so far managed to hang on to power in Tuscany, it has steadily lost control of cities and councils in the region to the Italian right over the past decade, although it remains dominant in the regional capital, Florence.

Its support base in central Italy consists mainly of small business owners, who Orsina argues are receptive to Salvini’s message of lower taxation and his suspicion of migration.

“Unlike other parts of Europe where support for the left historically came from industrialised labour, Italy’s ‘red belt’ is not made up of masses of workers in large plants,” he said. “Many voters in these regions run small businesses or are artisans, and a large amount of the population is not favourable towards globalisation, which is something the PD is seen to represent.”

Giromalo Gambini, a 63-year-old engineer from Grosseto, a Tuscan city that elected a right-wing mayor in 2016, said that many in the region had simply become sick of decades of uninterrupted rule by the left and had started to use smaller votes as a form of protest.

“The right didn’t exist in Tuscany 30 years ago, but we have seen more and more places here have voted in the right,” he said. “Many people believe that the left no longer defends the weakest in society. People got the feeling that it was too much of a regime, that the left took it for granted that they would win.”

For some younger voters, supporting the right is an act of defiance in a country where political allegiances are often passed down the generations.

“I come from a communist family but I support Salvini,” said Giacomo Costanzo, a 20-year-old student in Grosseto. “Older people here vote for the left because they are anchored to the past.”

Should the PD lose Tuscany, its leader, Nicola Zingaretti, is likely to come under renewed pressure. Since he took the party’s helm last March the PD has made little progress in national opinion polls but has managed to keep Salvini in opposition by striking an unlikely pact with Five Star when the League left government last August.

Orsina said a loss in Tuscany would underline the political weakness of the ruling coalition and bolster Salvini’s repeated pleas for President Sergio Mattarella to call national elections, which must be held by 2023, sooner rather than later.

“This current coalition government was born out of a minority, and it remains one,” Orsina said. “The opposition is significantly ahead in national opinion polls, and these regional elections will be an important test of public opinion.” – Copyright The Financial Times Limited 2020