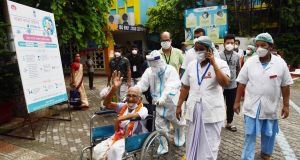 Mai Handique, a 100-year-old Indian woman, waves as she comes out on a wheelchair after recovering from Covid-19, at Mahendra Mohan Choudhury Hospital in Guwahati, India, on Wednesday. Photograph: EPA

Global coronavirus cases are expected to pass 30 million on Thursday, with India firmly in focus as the latest epicentre after reporting yet another record jump in daily infections.

India has confirmed another record jump in coronavirus cases, logging 97,894 cases in the past 24 hours.

The Health Ministry said that the new cases raised the nation’s confirmed total to more than 5.1 million since the pandemic began.

At the current rate of infection, India is expected within weeks to surpass the 6.6 million reported cases in the United States, currently the country with the most reported infections.

Nationwide, India is testing more than one million samples per day.

The International Federation of Red Cross and Red Crescent Societies warned that the coronavirus is driving discrimination towards vulnerable communities in Asia, including migrants and foreigners.

As cases surge in India, hospitals are grappling with unreliable supplies of oxygen that they need to treat tens of thousands of critical patients.

Australia’s Victoria state said the daily rise in infections eased further, as the state began relaxing most restrictions outside its largest city of Melbourne.

One of France’s biggest trade unions said a large number of staff at private Covid-19 testing facilities across the country will walk out on Thursday over work conditions that one employee said were like being in a war zone.

Italy could have its first shots of British drugmaker AstraZeneca’s potential Covid-19 vaccine by the end of November, the managing director of IRBM told Reuters.

US president Donald Trump said at least 100 million doses of a coronavirus vaccine could be distributed in the United States by the end of 2020, months earlier than a top government health official predicted earlier in the day.

Chinese vaccine maker Sinovac Biotech plans to start a clinical trial of its experimental coronavirus vaccine with children and adolescents later this month, widening its test on a shot that’s already in the final stage of study with adults.

Eli Lilly and Co said a single infusion of its experimental antibody treatment reduced the need for hospitalization and emergency room visits for clinical trial patients with moderate Covid-19.

The US Federal Reserve boosted its view of the American economy’s recovery from the coronavirus crisis.

The Bank of Japan kept monetary policy steady and slightly upgraded its view on the economy, suggesting that no immediate expansion of stimulus was needed to combat the pandemic.