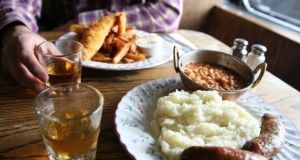 The Restaurants Association of Ireland said it was ‘shocked by the decision of NPHET to recommend to Cabinet that all indoor dining close in Dublin for the next few weeks. Photograph: iStock

Pubs that serve food and restaurants will only be permitted to open in Dublin if they have outdoor dining facilities, or for takeaway services, under recommendations from the National Public Health Emergency Team (NPHET).

The recommendations, which are expected to be accepted by Government, also mean travel into and out of Dublin will only be permitted for work or education and people will be told to work from home unless absolutely necessary.

The Government’s public health experts have recommended that Dublin move to Level 3 restrictions, according to Government sources. The Government has already indicated that pubs which do not serve food will remain closed.

Under the proposed recommendations, the number of guests allowed at weddings will be cut from 50 to 25, though weddings organised for this weekend will be allowed to continue as planned, with the new restriction only coming into place on Monday.

The new restrictions for the capital being introduced, from Friday night, if the Government follows the advice of the National Public Health Emergency Team (NPHET).

Level 3 restrictions would mean that Dublin would be subject to tighter restrictions than the rest of the country. They include a ban on social or family gatherings indoors or outdoors, additional restrictions on indoor dining, as well as people being told not to travel outside the county. No matches or events will be allowed and no spectators allowed at any games that do take place.

Restaurants Association of Ireland said it was “shocked by the decision of NPHET to recommend to Cabinet that all indoor dining close in Dublin for the next few weeks”.

“Currently, controlled & regulated environments like Restaurants are not the problem - households are!” chief executive of the association Adrian Cummins said on Twitter.

Earlier on Thursday, NPHET reported that one more person had died of Covid-19 and a further 240 cases had been confirmed.

Acting Chief Medical Officer (CMO) Dr Ronan Glynn remarked that half of the cases (119) are in Dublin, while there is also a growing age profile among those catching the virus.

Coronavirus Data Dashboard
Inside Politics · Beyond the blunders, does this Covid plan make sense?

The latest figures reported this evening by the Health Protection Surveillance Centre mean the total death rate in the State has risen to 1,789. Confirmed cases have now breached the 32,000 mark, climbing to 32,023.

The split is virtually even along gender lines while 61 per cent are under the age of 45. Almost half (47 per cent) are linked to outbreaks or close contacts of a confirmed case.

The data shows 44 cases have been identified as community transmissions.

One-hundred-and-nineteen cases are in Dublin while the rest are spread around the country - 19 in Wicklow; 17 in Kildare; 16 in Donegal; 15 in Waterford; and 10 in Limerick.

Fewer case were reported in other counties with eight in Cork; six in Louth; and five in Wexford. The remaining 24 are spread across counties Carlow, Cavan, Clare, Galway, Kilkenny, Laois, Longford, Meath, Monaghan, Offaly, Tipperary and Westmeath.

A further breakdown of coronavirus data from the Government shows there are 14 cases in intensive care units. Of the more than 80,000 tests carried out in the last week, there has been a 2.2 per cent positive rate.

“Fifty per cent of today’s cases are in Dublin. We are now seeing a higher proportion of cases in older age groups,” said Dr Glynn.

“Act now to save lives. Limit your contacts as much as possible. Assume you and those you meet are infectious, keep your distance and do your part to keep others safe.”

The case numbers are up to midnight on Wednesday.

Earlier on Thursday, Dublin GP Ray Walley suggested the capital Dublin should be at Level 4 of the Government’s Living with Covid-19 strategy. The Glasnevin based doctor said he was particularly concerned that under Level 3 up to 25 people could gather at a function such as a wedding.

On Wednesday night, public health experts expressed a high degree of alarm at the current rate of infection, with one saying he was “more concerned than at any point in time since late April”.

Speaking on RTÉ radio’s Today with Claire Byrne show, Dr Walley warned that the age profile is increasing (among Covid patients) and this will have an impact “downstream”.

Dr Walley said the concern was that the rate of infections had increased because of social gatherings, this could spread to older people who have a higher morbidity rate and require more hospitalisation.

“It is like flooding on flooding, it takes longer to go away. All of this takes a long time to recover.”

NPHET has to consider putting Dublin at Level 4, he said, and there also needs to be more positive messaging. People should be told what they can do, not what they cannot do. They also need to know how to maintain their health while living with the virus.

Dr Gabrielle Colleran of the Irish Hospital Consultants Association warned that there was an urgent need to double intensive care unit (ICU) beds and number of consultants as Ireland has half the EU average of ICU beds and lowest level of consultants.

Last winter was the worst winter with regard to trolleys, the issue needed to be tackled now, she added. “We need to have enough staff to deal with this.”

Meanwhile, neuroscientist Tomás Ryan has said the Government should provide a strategy to help the country get to Level 1 by Christmas.

Dr Ryan, assistant professor of biochemistry and immunology at Trinity College Dublin, said the framework announced by the Government this week was not a strategy, it was a structure for which a strategy was needed to show how the country could get to Level 1.

“We want a way of moving through this so we can get to Level 1 by Christmas,” he told RTÉ radio’s Morning Ireland.

Active measures were required, he said, such as a more aggressive system of testing and tracking and more regional measures allowing individual counties to take control of their own situations.