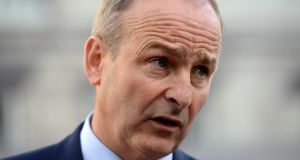 Micheál Martin: the Government is struggling to deal with two contradictory imperatives. One is to protect public health and the other is to avoid economic disaster. Photograph: Dara Mac Dónaill

The Coalition has been getting it in the neck from the Opposition and the media for confused communication of its Covid plan but the reality is that absolute clarity is impossible to provide.

The root of the problem is that finding the balance between those two demands can only be achieved by messy compromises that will inevitably create some confusion.

Of course the Government didn’t help itself by the farcical series of events which overshadowed the announcement of its “Living with Covid-19” plan on Tuesday. The launch descended into slapstick when it emerged that the Cabinet was going into temporary self-isolation and the Dáil was then hastily adjourned.

All of this happened because Minister for Health Stephen Donnelly had a suspected case of Covid which ultimately proved to be a false alarm. Why he could not have been tested quietly before triggering the series of events that made a laughing stock of the entire plan is a mystery.

The resulting confusion fuelled the impression that the Government is not on top of the problem and has no clear idea of what to do in response to the escalating scale of the outbreak in Dublin. It also raised questions about the inherent stability of the Coalition even though its three leaders were said to be equally committed to the plan.

Since it took office at the end of June the Government has struggled to assert its authority. That is largely due to unforeseen events that have beset it almost from day one but it has not helped itself by giving the impression of division in the ranks, with Fianna Fail and Fine Gael competing with each other to try and show the public they know best.

Taoiseach Micheál Martin has at times been hesitant and a bit long-winded at Covid press conferences while Tánaiste Leo Varadkar has made a number of unhelpful public interventions as he continues to bask in the afterglow of public approval for decisive action last March when he put the country into lockdown.

It was ironic that this week’s shambles happened just when it appeared that the two leaders had got their act together and were now reading from the same page.

It was unfortunate, as acting chief medical officer Dr Ronan Glynn pointed out, that the “Living with Covid-19” plan was published just when the trajectory of the virus was changing. In particular there was already serious worry that it was on the verge of escalating out of control in Dublin.

The attempt to put Dublin into a special category, somewhere between Levels 2 and 3 in the plan, was an expedient designed to avoid introducing more serious restrictions in the capital. The lack of clarity was not helped by mixed messages from Minister Donnelly, the Taoiseach and the Tánaiste about how people in Dublin should restrict their movements.

The lesson the Government needs to take from the past week is the absolute necessity for better planning and more coherent public communication at every stage in the battle against the virus. An end to one-upmanship will also be crucial in convincing the public that Ministers know what they are doing.

Yet for all that, it has to be recognised that leading the country out of the pandemic was never going to be as easy as declaring a nationwide lockdown back in March.

Ireland is not the only country which is struggling to find a coherent way of preventing a second wave of the virus. Similar problems are evident in the UK, with the government there being accused of contradictory and incoherent policies. One of the problems our two countries have in common has been the failure to ramp up testing and tracing to a level that can make a real difference to the spread of the virus.

The contrast between the situation in these islands and Germany is striking. The Irish Times Berlin correspondent Derek Scally noted two weeks ago that travel between there and Ireland now entailed something of a culture shock. “Going back to Dublin felt like going back a few months, it feels much bigger here than Berlin, there’s such a fearful mood of caution,” remarked a friend of the journalist who had travelled home.

The more relaxed and open mood in Germany has not resulted in a serious spike in infections, so far at least, while the much more restrictive regime here has clearly not worked nearly as well. The big difference between the two countries is the speed and scale of the test and tracing system. Around 1.1 million swabs are being processed in Germany every week and some Irish tests are now among that number due to our limited capacity.

A big improvement in the Irish testing system is clearly needed and it should have been in far better shape more than six months after the virus hit the country. Given its continued shortcomings there is probably no option but to put Dublin into the more restrictive Level 3 this weekend with all of the hardship and social dislocation that will entail.