Over 20 coronavirus cases linked to outbreak in meat processing plant 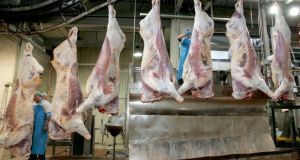 Large outbreaks of the virus in food processing plants contributed to the decision to introduce local lockdowns in Kildare, Laois, and Offaly in early August. File photograph: Dave Sleator

There has been a Covid-19 outbreak involving more than 20 cases in a meat processing plant in Co Waterford, according to trade union Siptu.

Greg Ennis, Siptu organiser for meat plant workers, confirmed he was aware of a “significant outbreak” in a Co Waterford plant run by Dawn Meats.

Mr Ennis, who said he was in contact with workers in the plant, said he understood the outbreak was connected to “20 to 30 cases”.

In response to queries on the outbreak from local TD David Cullinane, Minister for Health Stephen Donnelly confirmed a recent cluster linked to a workplace had resulted in 28 coronavirus cases, without identifying the premises.

In a statement, Dawn Meats declined to comment on the reports of an outbreak at the Co Waterford plant.

“We do not plan to publish updates or give commentary on test results at specific plants, where positive tests are identified we will ensure all staff, close contacts, and the HSE and relevant authorities are fully informed,” the statement said.

“Dawn Meats approach is that any staff member who may be obliged to self-isolate in line with HSE guidelines, will continue to be paid,” it said.

The company said all its facilities “undergo weekend deep cleaning as part of our Covid control program”.

Mr Ennis said he welcomed the fact workers who were required to self-isolate would continue to be paid.

The Siptu official criticised the lack of information provided on the outbreak by the company.

“There are restrictions from the meat plant in releasing information, and that’s not good enough,” he said.

A spokesman for the Health Service Executive (HSE) said it did not comment on individual outbreaks or clusters.

Serial testing of workers in meat plants was paused last week, but has resumed again in recent days.

Mr Ennis said he was “extremely concerned” about the testing situation in meat plants, which had been shown to be “unprecedented vectors of the virus.” The union official said he welcomed the fact mass testing of plant workers had resumed this week.

Large outbreaks of the virus in food processing plants contributed to the decision to introduce local lockdowns in Kildare, Laois, and Offaly in early August.

In recent days the State’s acting chief medical officer, Dr Ronan Glynn said apart from Dublin, he was also concerned with increasing Covid-19 cases in a number of counties, including Waterford.

Speaking in the Dáil on Thursday, Sinn Féin deputy leader Pearse Doherty said the lack of information on the outbreak in Waterford and similar workplace clusters “is not good enough.” The Donegal TD called for the HSE to publish the details of clusters in workplaces.

Tánaiste and Minister for Enterprise Leo Varadkar said the HSE and the National Public Health Emergency Team (NPHET) “should be as transparent as possible in putting out details of where clusters are located”. However, he said that should not result in “stigmatising people” or situations where individuals could be identified.

“If public health doctors and officials dealing with the cluster believe a place has an outbreak and should be closed, the Government supports any decision to close a business, meat plant, school or anything else if that is the right thing to do in public health terms,” Mr Varadkar said.