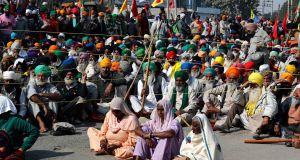 Protesting farmers on Sunday rejected the Indian government’s offer to hold immediate talks if they ended their blockade of key highways. Photograph: AP

Thousands of protesting Indian farmers refused to comply with a government appeal to stop blockading major highways into New Delhi on Sunday and vowed to intensify their action against prime minister Narendra Modi’s changes.

Farmers from states around the capital have been demonstrating for three straight days against deregulation of the sector that allow farmers to sell produce to buyers beyond government-regulated wholesale markets, where growers are assured a minimum price.

Small growers fear the changes will make them vulnerable to competition from big business, and that they could eventually lose price supports for staples such as wheat and rice.

In a statement on Sunday, an umbrella group representing different farmers’ unions slammed the government for saying it would engage in talks with the farmers if they moved their protest off the roads into a designated stadium site.

“The government, if serious about addressing the demands of farmers, should stop laying down any conditions and should come straight out with the solution it is offering,” noted the group.

Mr Modi sought to allay farmer concerns during his monthly radio address, saying “farmers will get new rights and opportunities” through these laws.

Union and opposition leaders, however, were unmoved by the prime minister’s comments, and criticised the government’s use of tear gas and water cannon to disperse protesters on Friday.

“Farmers are not fools who would not understand what is in their interest,” said Yogendra Yadav, president of Swaraj India – an opposition party.

With key roads blocked, prices of fresh produce at wholesale markets in Delhi have already begun to tick up, and the protests also disrupted commuter travel into the city.

Farmers’ unions called on farmers in other states to expand the protests from Tuesday, while urging farmers in neighbouring states and others to join demonstrations in Delhi. – Reuters