‘It’s finally got to rural America’: Covid-19 surges in the Dakotas 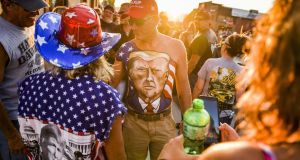 John Riley shows off his chest painted with a portrait of president Donald Trump during the Sturgis Motorcycle Rally in August, 2020 in Sturgis, South Dakota. Photograph: Michael Ciaglo/Getty Images 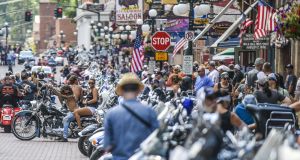 Like many in South Dakota, Curt Soehl believed the sparsely populated state tucked deep into America’s interior would be spared the worst of the coronavirus pandemic.

But after a summer in which its stubbornly independent residents broadly flouted public health recommendations, Soehl, a member of the city council in Sioux Falls, the state’s biggest city, noticed the virus creeping closer.

His two daughters, who are nurses, told him in September about the toll that rising infections were taking on the hospital where they work. Then Soehl’s next-door neighbour fell ill, as did another neighbour across the street. Covid deaths are now coming in bunches.

“All of a sudden you’re getting 20, 30, 40, 50 deaths a day. And for us, in a small state and in a small community like ours, those are some significant numbers,” Soehl said. “It has not affected us as early as the metropolitan areas like New York, or Philadelphia or Chicago, but it’s finally got to rural America. And that’s where we are today.”

'Our people thought: "We don’t need to do all those recommendations that the medical association had given because we’re so far apart"'

North and South Dakota, with a combined population of just over 1.5 million, have become an unlikely hotbed of a global pandemic. South Dakota has a positivity rate of more than 43 per cent of those tested, according to Johns Hopkins University. That is among the highest in the nation and compared with about 3 per cent in New York. North Dakota, meanwhile, was recently found to have the highest Covid death rate per capita in the world.

What distinguishes the pandemic in rural communities, according to health experts, is that so many residents believed they were insulated in ways that their urban counterparts were not. It is a notion that was often encouraged by their political leaders.

At times, they almost appeared to taunt the virus. With the backing of governor Kristi Noem, for example, South Dakota disregarded public health warnings and went ahead with a 10-day motorcycle rally in August that drew an estimated 460,000 people to the town of Sturgis. It has since been blamed by the Centers for Disease Control and Prevention for sowing Covid cases across the Midwest.

Noem, a close ally of US president Donald Trump, also welcomed him and thousands of supporters to Mount Rushmore for a July 4th fireworks celebration. The governor made it clear that social distancing and masks were not necessary.

“Our people thought: ‘We don’t need to do all those recommendations that the medical association had given because we’re so far apart. We’re not going to be like New York or Italy or Spain, ’” said Benjamin Aaker, an emergency physician and the president of the South Dakota State Medical Association.

They did not realise, Dr Aaker said, that they were still mixing at grocery stores and churches and bars. “It just took us longer and now we’ve caught up to it, and now we’ve surpassed that, and now we’re top of the nation in terms of infection rate and death rate.”

From a different vantage point, Andrew Cuomo, New York governor, remarked on the same phenomenon. “There can be a sense of denial that ‘we’re immune from this. It’s not going to happen here like it happened in New York or New Jersey, ’” he said. “Yes it is. And it can. And it’s happening, even in a place like South Dakota.”

At the bedside, doctors say Covid-19 looks much the same in rural America as it did earlier this year in an overwhelmed hospital in New York City.

But in other ways it is unique. Like other rural areas, the Dakotas were suffering a chronic shortage of doctors and nurses even before the pandemic. Outside of a few larger cities, their hospitals tend to be small facilities that are ill-equipped to treat a severely ill coronavirus patient.

“[There] might be one physician or there might be two physicians for that entire community and they’re trying to take care of more patients than they ever have at once,” Aaker said.

Seriously ill patients are typically transferred hundreds of miles away to a medical centre in Rapid City or Sioux Falls. But those facilities are now nearing capacity. As a result, some Covid-19 patients are being sent as far afield as Utah for treatment.

In a recent report, Eric Toner, senior scholar at the Johns Hopkins Center for Health Security, identified staff shortages as “the greatest challenge” as the pandemic spreads nationwide.

“A lot of people, a lot of doctors and nurses, converged on New York City [in the spring] . That can’t happen when the disease is everywhere,” Toner said. Nor would it be easy to quickly turn out more of the speciality nurses needed to treat coronavirus patients, he added: “You can’t just make a respiratory therapist on the fly any more than you can make a critical care doctor or a critical care nurse on the fly.”

In North Dakota, governor Doug Burgum appeared mindful of those constraints when he issued an order last week allowing infected but asymptomatic nurses to continue to treat Covid-19 patients. But Burgum infuriated nurses.

“It’s just wrong for many reasons,” said Sherri Miller, a nurse in Bismarck who is the executive director of the North Dakota Nurses Association. “How does it work when a Covid-positive nurse is coming to work and needs to eat and drink and their colleagues need to eat and drink and so forth? And share elevators?”

In recent weeks, Burgum has begun to shift course by introducing new restrictions on businesses in an attempt to slow the spread of infections. “Our situation has changed, and we must change with it,” he said recently.

But in a region of the country with a strong libertarian streak the acceptance of public health restrictions remains grudging, at best. Miller marvelled at how even members of her family questioned the utility of masks, “which is amazing to me”, she said.

In Sioux Falls, Soehl’s attempts to pass a mask mandate were thwarted. The city council finally gave its assent last week – but only after the measure was stripped of a $50 penalty for non-compliance. At state level, Noem continues to resist the idea even though doctors and healthcare companies are pleading for it.

Said Soehl: “There’s still strong resistance to wearing masks in our part of the country.” – Copyright The Financial Times Limited 2020