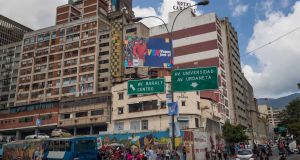 Propaganda invites voters to turn out in the elections for the National Assembly in Caracas. Photograph: Miguel Gutierrez

The political opposition in Venezuela is set to lose its last toehold in the country’s institutions this Sunday in legislative elections the European Union says lack the conditions to be “free and fair”.

The increasingly authoritarian regime of President Nicolás Maduro has targeted retaking the national assembly ever since the opposition seized control of it in 2015 in the last elections widely deemed to have been free.

“We are going to rescue the national assembly and put it at the service of the people,” Mr Maduro declared this weekend. The successor of populist leader Hugo Chávez following his death in 2013 from cancer, Mr Maduro has overseen a series of rigged polls since his ruling socialist party was surprised by its crushing defeat in 2015.

His chavista regime has tightened its grip on the country’s electoral council and also used its control of the supreme court to interfere in the running of opposition parties in order to impose new leaders subservient to the government.

In a report earlier this year, United Nations human rights investigators accused Mr Maduro and other senior officials of planning and directing human rights violations, some of which amounted to crimes against humanity in their efforts to suppress political opposition.

The prosecutor at the International Criminal Court in The Hague has said there is “a reasonable basis” to believe crimes which fall under the court’s jurisdiction have been committed in Venezuela.

Mr Maduro had invited the EU to send election monitors but Brussels declined with its foreign policy chief Josep Borrell declaring “that conditions are not met, at this stage, for a transparent, inclusive, free and fair electoral process”.

The UN has also declined an invitation to send observers to a poll which regional body the Organisation of American States declared would be “fraudulent”.

Opposition leader Juan Guaidó has dismissed Sunday’s election as a “farce” and most opposition parties have called for a boycott of what they say is a rigged contest. They are instead organising a parallel referendum running between December 6th and the 12th held in person and online in which voters will be asked to reject the legitimacy of the president and the legislative elections.

After the outgoing assembly ruled Mr Maduro’s victory in 2018’s presidential election fraudulent, its head, Mr Guaidó, declared himself interim president. He has since been recognised by over 50 countries, including a majority of Latin-American states.

But he exercises little power at home and his efforts to turn the military against Mr Maduro have so far failed. He is facing growing criticism from supporters about his inability to break the country’s political stalemate. Opinion polls show widespread voter apathy with almost two-thirds of Venezuelans saying they have no faith in either the government of Mr Maduro or the opposition led by Mr Guaidó.

In a bid to boost turnout, the government has relaxed quarantine measures imposed to combat the spread of the coronavirus for the whole of December and Mr Maduro has promised a “special prize” for communities with the highest turnout.

Mr Maduro is confident of victory despite overseeing one of the most spectacular peacetime economic collapses in history. After years of chavista mismanagement and corruption, Venezuela’s economy is a ruin, having shrunk by two-thirds since 2013. It is predicted by the International Monetary Fund to contract by another 25 per cent this year. An estimated five million Venezuelans have fled the country in what is the world’s largest refugee crisis after Syria.

Over 90 per cent of those who remain in what was once South America’s richest country now live in poverty. Aid agencies estimate at least one in four require humanitarian assistance, with Catholic charity Cáritas Internationalis reporting a 73 per cent increase in acute child malnutrition.

The economic and humanitarian crises are being exacerbated by sanctions the United States imposed targeting Venezuela’s oil industry, its last source of the hard currency required to pay for imports of food and medicine.

The Trump administration recently ignored appeals from Venezuelan civil society to allow the Maduro regime to continue to trade crude oil for diesel imports which are needed for electricity generators and the transport network. Despite having the world’s biggest oil reserves, Venezuela’s oil refineries have decayed to the point the country can no longer refine its own crude.