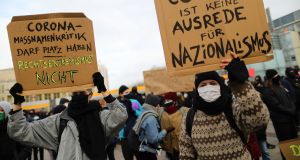 Placards declare “Corona is not an excuse for nationalism”: Foreign minister Heiko Maas has argued “anyone today comparing themselves to Sophie Scholl or Anne Frank is making a mockery of the courage it took to stand up to the Nazis”. Photograph: Omer Messinger

It was getting dark last Saturday in Hanover when the 22 year old, who identified herself as “Jana”, took to the stage at a demonstration against Covid-19 measures.

The online video of her speech, viewed more than a million times in two days, shows the young woman in a black coat on a small stage making an eye-watering historical comparison.

“Jana” tells the crowd how, in the last months, she has protested against pandemic restrictions and distributed pamphlets against the federal government.

“I feel like Sophie Scholl,” she says, name-checking a 21-year-old Munich woman executed by the Nazis in 1943 for agitating against the fascists and their war effort.

Moments later Jana is approached by a man who hands her his high-vis vest and can be heard saying he’s “not working as a steward for such nonsense”.

“This is minimising the Holocaust,” he says to the shocked young woman. Another onlooker shouts: “This is more than embarrassing.”

Insisting she “didn’t do anything”, Jana turns her back on the crowd, throws away the microphone and script before departing the stage in tears.

She’s not alone. Last week in Karlsruhe, an 11-year-old told another anti-mask gathering she felt like Anne Frank because she had to celebrate her birthday with friends quietly to avoid attracting neighbours’ attention.

Frankfurt-born Frank hid with her family in a concealed flat in Amsterdam until they were betrayed; the girl was 15 when she died of typhus in the Bergen-Belsen concentration camp.

In the last months, German opponents of Covid-19 restrictions – and a thriving army of virus conspiracy theorists – have embraced the idea they are resistance fighters against a new totalitarian German state.

Beata, a Berlin friend, is convinced her refusal to wear a mask where required will soon see her excluded from German life to the extent that she “will eventually have to wear something like a Star of David”.

The star was introduced across Nazi-occupied Europe in the 1940s and was obligatory for Jews to wear visibly, making them easier targets of discrimination and violence.

Some anti-mask protesters have donned such stars and striped concentration camp uniforms at anti-lockdown marches.

And last week the far-right Alternative für Deutschland (AfD) dubbed Germany’s revamped Covid-19 regulations an “Enabling Act”, in a deliberate nod to the 1933 law that disabled parliament and handed the Nazis absolute power.

The scale of such skewed comparisons has prompted a horrified pushback from German politicians. Foreign minister Heiko Maas has argued that “anyone today comparing themselves to Sophie Scholl or Anne Frank is making a mockery of the courage it took to stand up to the Nazis”.

“Just as the demonstrations show no regard for the health of other citizens,” he said, “they have no respect for Nazi victims.”

Long-term Holocaust researcher Alexandra Senfft suggests the growing number of such comparisons exposes a worrying shortfall in German historical debate. Despite considerable public engagement with Nazi crimes, she believes few Germans have dealt with personal perpetrators in their own family.

Instead they view Nazi-era perpetrators as an abstract “other”, allowing them a more comfortable over-identification with victims.

Senfft, a writer and granddaughter of a Nazi war criminal, suggests the pressures of Covid-19 have catalysed a transgenerational transmission of perpetrator denial and perpetrator-victim inversion in Germany. This, combined with possible authoritarian upbringing has, she suggests, created a subconscious desire for authoritarianism and a strong leader figure among those claiming to be marching for “liberty”.

“This is a perversion of history and a falsification of facts that is tantamount to second guilt,” she says. “It abuses the victims, mocks their fate and hurts their descendants.”