Sarkozy corruption trial to include evidence obtained from secret phones 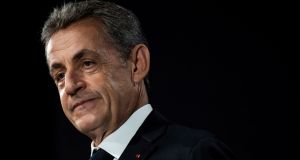 Nicolas Sarkozy’s corruption trial is scheduled to begin on Monday in Paris over allegations he promised to help an official land a prestigious Monaco court job in exchange for covert aid in a legal fight to stop investigators using the former French president’s diaries.

The much-awaited trial includes evidence prosecutors obtained by wiretapping Mr Sarkozy’s calls on so-called burner phones with his then-lawyer, who acted as a go-between, according to the indictment. It centres on how Mr Sarkozy may have abused his power by coaxing the senior legal official, known as an avocat général, to use his own connections with judicial colleagues to influence the outcome of the diaries case.

When Mr Sarkozy’s lawyer told him – in a tapped call – in 2014 that the official was hoping for a good word to get an appointment at Monaco’s top administrative court, the ex-president replied: “I’ll help him.”

Mr Sarkozy is only the second former French president to go on trial in modern times, and the first over corruption accusations. After leaving office in 2007, the late Jacques Chirac was prosecuted over allegations dating back to his years as mayor of Paris. He received a suspended jail sentence after being found guilty of misusing city funds to benefit his supporters and political party.

The trial, which also includes Mr Sarkozy’s then-lawyer, Thierry Herzog, is set to run until December 10th. It could be postponed after the now-retired civil servant, Gilbert Azibert, requested a delay due to health problems. All three defendants risk a maximum jail sentence of 10 years as well as a fine.

Ever since losing his bid for re-election after serving as president from 2007 to 2012, Mr Sarkozy has been mired in legal woes. Just weeks after his presidential immunity ended, his private home and his Paris office were raided by police in a probe into claims that he received illegal campaign cash from L’Oreal SA heiress Liliane Bettencourt ahead of his 2007 election.

Even though these accusations against Mr Sarkozy were dropped in 2013, the ex-president fought on to make sure details of his presidential diaries, which had been seized by investigators at his Paris office, were struck out from the file as the Bettencourt case progressed without him. He lodged a first lawsuit, which was dismissed, and then appealed at France’s top court, the Cour de Cassation. It was the outcome of that second lawsuit that he was allegedly trying to illegally monitor and influence with the help of Azibert.

While the Bettencourt case file was confidential, Mr Sarkozy was fighting as a matter of principle: he considered the immunity he’d benefited from as France’s president prevented the use of his diaries by investigators. Lawyers for Mr Sarkozy, Mr Herzog and Mr Azibert declined to comment ahead of the trial.

Mr Sarkozy and Mr Herzog’s defense teams have claimed during the investigation that Mr Azibert never provided any confidential information and never tried to influence top court officials involved in the lawsuit. They say there was never any sort of quid pro quo.

In 2013, French investigators had begun tapping Mr Sarkozy’s regular phone as part of a different probe into allegations of illegal funding of the Frenchman’s 2007 campaign by the regime of Libya’s former leader Muammar Gadafy. But Mr Sarkozy and Mr Herzog had been using various burner phones starting in 2012 as they suspected their conversations on official lines might have been recorded, investigators say in the indictment. It wasn’t until two years later that authorities uncovered the pair’s secret numbers.

In the February 2014 conversation, Mr Herzog told Mr Sarkozy that a vacancy was expected to come up shortly at the Monaco court but that Mr Azibert thought he might “need a bit of help” to get the job.

Sarkozy’s legal problems won’t be over after his corruption trial. He is due back in court next year

Mr Sarkozy told his lawyer that he should “call him today and tell him I’ll take care of it because I’m going to Monaco.”

Mr Sarkozy later phoned to say he’d arranged a meeting with a Monaco minister to raise the matter. But in a subsequent conversation Mr Sarkozy said he’d had second thoughts about interceding in favour of someone he didn’t know well. Investigators believe that change-of-heart conversation was staged. They were never able to find evidence to back their suspicions that someone had tipped off the former president that his burner phone was being tapped. Mr Azibert never got the Monaco job and Mr Sarkozy lost his Cour de Cassation lawsuit to strike his presidential agendas from the Bettencourt case file. Under French law, simply offering to carry out a favour for an official is illegal, regardless of whether the promise was made good, according to the indictment.

Sarkozy’s legal problems won’t be over after his corruption trial. He is due back in court next year on charges that he illegally exceeded campaign-spending limits on his failed 2012 re-election bid and the investigation into alleged covert Libyan funding is ongoing.