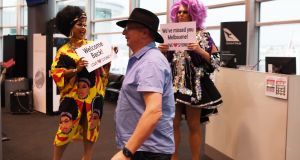 The UK government will announce on Monday that self-isolation will no longer be required for those who have come into contact with people who have tested positive for COVID-19, the Telegraph reported.

Contacts of those who test positive will be asked to undergo daily tests for seven days, and will be allowed to go about their business in the meantime, the newspaper said.

Ministers will say that the current system of requiring people to stay at home for 14 days will be dismantled nationwide in January, if pilot schemes succeed, according to the newspaper.

The Australian states of New South Wales and Victoria reopened their border on Monday after Victoria stamped out a second coronavirus wave, raising the prospect of a quicker return to normal and a speedy economic recovery. The border, closed for more than four months, was last shut in 1919 during the Spanish flu pandemic.

The midnight reopening triggered celebrations, with most drivers crossing the border honking their car horns to cheers from residents of nearby border towns, television footage showed.

The lifting of the border ban should see a surge in air traffic between Melbourne and Sydney, one of the busiest routes in the world before the pandemic, with Sydney airport expecting nearly 4,000 passenger arrivals from Victoria on Monday.

South Korea reported another daily rise of more than 200 new coronavirus cases on Monday, a day before tighter social distancing rules aimed at blunting a third wave of infections take effect. The latest measure will close bars and nightclubs, limit religious gatherings and restrict on-site dining at restaurants and cafes from Tuesday.

“If we can’t sever the links of infections, our anti-virus efforts and medical responses might become unsustainable,” vice health minister Kang Do-tae told a meeting on Monday.

Authorities worried the latest wave might be more difficult to stamp down because most infections occurred in the general community around the greater Seoul area, home to about half of the country’s 52 million population, unlike previous large outbreaks stemmed from specific groups. Seoul city said on Monday it will separately impose a ban on rallies of 10 people or more and scale back nightly public transportation to minimise citizens’ movements.

Pfizer vaccine may get UK approval this week; US vaccine shots could start mid-December

Britain could give regulatory approval to Pfizer-BioNTech’s Covid-19 vaccine this week, even before the United States authorises it, the Telegraph news site reported on Sunday.

Citing government sources, it said British regulators were about to start a formal appraisal of the vaccine, made by Pfizer Inc and BioNTech SE, and that the National Health Service had been told to be ready to administer it by December 1st. The UK Department of Health had no comment on Sunday on when the first vaccinations would be administered.

Separately, US healthcare workers and others recommended for the nation’s first Covid-19 inoculations could start getting shots within a day or two of regulatory consent next month, Dr Moncef Slaoui, chief scientific adviser for “Operation Warp Speed”, the government’s vaccine development effort, said on Sunday. – Reuters