From home working to leaving the city: how the pandemic is changing how we live

Europe Letter: Covid-19 will see a huge societal shift, but it will have to be carefully managed 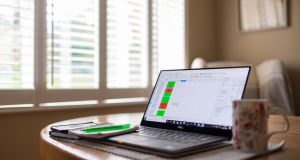 By April, 40 per cent of workers in the EU were teleworking full-time, according to the EU agency Eurofound.

The coronavirus pandemic is likely to lead to permanent changes in the way our lives are structured. The issue is the subject of an interesting new paper by the OECD, which focuses on the implications of the sudden mass shift to remote working.

The effect of the pandemic was immediate: by March 24th, a total of 21 out of 31 European countries had ordered the closure of workplaces or recommended teleworking. This suddenly accelerated a trend that was already slowly under way.

The results were dramatic. By April, 40 per cent of workers in the EU were teleworking full-time, according to the EU agency Eurofound, a large increase from the 9 per cent that mainly or exclusively worked from home according to its 2015 survey. In Italy, the number of remote workers rose from 500,000 to eight million.

The experiment has upended assumptions about remote work, which was largely seen as a work-life balance benefit for employees prior to the pandemic. But it actually benefits businesses. According to the US-based Global Workplace Analytics, each employer can save approximately $11,000 (€9,300) a year for each employee who works from home half the time, while employees save between $2,500 and $4,000.

Remote working has been found to reduce absenteeism, while the hours employees work actually increased during the pandemic, by some three hours per day in the US and by two hours in UK, France, Canada, and Spain. This is partly due to employees starting earlier, as they do not need to commute, but also may be down to multitasking such as managing childcare.

Businesses are preparing to adjust accordingly. A survey by Gartner found that 74 per cent of the 317 chief financial officers and finance leaders surveyed said they would make at least some positions permanently remote after the pandemic. This could affect a lot of people: an estimated 56 per cent of the workforce in the US has a job that can be performed at least partly from home.

One of the major impacts could be the transformation of the housing market.

“A surge in teleworking adoption could contribute to some decentralisation of jobs away from major metropolitan areas or on the outer edges, as workers are freer to locate where cost of living is lower or quality of life is higher,” writes the OECD report’s author, policy analyst Mattia Corbetta.

“Such shifts could help alleviate rising housing prices in big cities, as well as congestion from regular commuting, opening up opportunities for more rural communities or smaller metropolitan areas to attract residents.”

Property firms are already considering the future of large office blocks in big cities. Data from the US show a surge in demand for homes in less-populated areas, and a slump in the densest parts of cities. In the UK, over a third of people surveyed by Nationwide said they were thinking differently about their home due to the pandemic, especially the importance of a garden and the need for more indoor space for home-working.

Reducing commuting could slash carbon emissions, as well as boost rural development. However, the societal shift would have losers as well as winners. There’s the risk of exacerbating existing inequalities, between manual workers who cannot work from home and those who can. Equally, it could do so along gender lines, if remote working causes childcare responsibilities to fall disproportionately to women, as surveys show it has done during the pandemic.

For businesses, shops that rely on office workers and commuters for their trade risk being wiped out by the societal shift. It’s also harder for small businesses to adjust to remote working than larger ones, running the risk of making them less competitive.

The change has to be managed carefully. Employees often need support, whether to have the required laptop and webcams, or to have an ergonomic chair, as improvised home work setups are expected to cause a surge in back problems. The tendency to work longer hours and the risk of blending personal and professional life can increase stress.

National and local governments around the world have introduced policy responses to the shift. These range from incentives to attract remote workers to relocate to boost local economies, to the Occitanie region of France’s “train instead of lay off” programme, a remote learning initiative.

In Ireland, shortcomings in fast broadband are a major obstacle standing in the way of rural areas benefitting from such a shift. Another serious consideration for policy-makers is in housing and urban planning. The collapse in tourism and the international student market has showed the limitations of recent urban planning in Dublin that was targeted to meet their demand.

Now, the tiny apartments and co-living arrangements that dominate the development pipeline in Dublin may by the time of completion look like a hangover from a pre-pandemic world.