Home of recently married Anthony and Maria Clery among those destroyed

A view of inside Colm Reid's damaged apartment in Beirut after the dock's explosion. 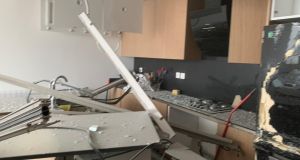 Anthony Clery was halfway through a work call on Tuesday afternoon when he heard a large bang and noticed a plume of smoke less than a kilometre from his apartment near the port of Beirut.

The Wicklow native pulled out his phone to take a snap of the cloud to send to his wife Maria who was in the kitchen next door. The couple, who got married last week and spent five months apart between February and June because of the Covid-19 pandemic, had moved into the new building three weeks previously.

As Clery turned back to face his computer monitor, a wall of grey smoke suddenly rushed towards his apartment block. “I didn’t even hear the second bang. There was just this split second with grey coming towards the window, the glass smashed and I was shot back against the wall.

“When I looked up it was like a movie; there was smoke and I could hear a ringing sound in my ears. I saw blood everywhere, the glass had gone all over my face and legs. The whole window in front of me was gone. Then the sirens and screams started.”

Clery immediately rushed into the hallway where he discovered Maria and her friend had taken shelter seconds before the second blast. Had they remained in the kitchen, which was torn to pieces by the explosion, the two women could have lost their lives.

The couple grabbed their passports and some personal belongings and ran from their 6th floor apartment into the street where they discovered a city in chaos. They eventually flagged a lift on a nearby highway and drove to a hospital where Clery got injections for tetanus and received stitches for his wounds.

The couple eventually made it to Maria’s father’s home outside the city and returned to their apartment on Wednesday to collect some belongings. “Of all the people who were that close to the blast we’re probably some of the luckiest,” said Clery, adding that he hoped Irish people would support organisations helping those affected by the blast.

At least 135 people were killed and more than 5,000 injured in the massive explosion which ripped from Beirut’s port through the city on Tuesday afternoon. This death toll is expected to rise with many people still believed to be trapped beneath rubble at the port warehouses which stored highly explosive material.

There are some 250 Irish citizens living in Lebanon, according to data from the Department of Foreign Affairs (DFA). While a number of citizens have contacted the DFA for support since Tuesday’s blast, a spokeswoman said there were no reports of Irish people being seriously injured in the incident.

A spokeswoman for the defence forces said all Óglaigh na hÉireann personnel serving in south Lebanon were safe and accounted for and that the soldiers’ “operational situation” remained unchanged.

Ali Heron, who works for Trócaire’s Syria response in Beirut, was having a drink with a friend outside a bar a couple of blocks from the port when the explosion happened. She saw a red plume go up in the sky and suddenly the pair were thrown to the ground.

“I don’t know if we were knocked out or just in shock. We quickly got under the table and then realised we needed to get out of there. Everything had been destroyed. There were people covered in blood around us, cars had been flattened.”

The two women made their to a friend’s home where they took refuge overnight. Like thousands of people in the city, Heron’s apartment was destroyed in the blast.

The north Dublin woman says she’s still in shock but feels immensely grateful that she was not badly injured in the blast. “I don’t know how I came out of it basically unscathed. I just had a few glass wounds and a bump on my head. It feels like a miracle. I’m lucky to be alive.”

Having spent 18 months living in Beirut, she’s worried for the welfare of people from the city who were already suffering the effects of a struggling economy, the ongoing Covid-19 pandemic and last year’s October revolution.

“It’s devastating walking around the city now. East Beirut has been decimated, there’s not a building unharmed. Lebanon has already suffered so much. But there is such a community spirit, people are already out sweeping the glass and they have huge resilience.”

The apartment of Peter Fitzmaurice, a lawyer working with the UN refugee agency, was protected during the blast by a nearby hill which separates it from the port. Originally from Belfast, Fitzmaurice thought he’d heard a car bomb when the first blast went off and told his two sons to lie on the floor.

“When the second hit we thought it was an earthquake, the entire building shook and people were screaming. We ran down from the fifth floor to get onto ground level. there was glass everywhere. Since the civil war everything has been rebuilt around here and it’s all built with glass.”

“Lebanon does not need this right now. They already had the bad economic situation and this country imports everything but now the entire port area is gone.”

Colm Reid’s apartment, which is located just over a kilometre from the port, was badly damaged in the blast. Reid, who has lived in the city for four years, was driving home from work when the explosions happened.

“First I saw the cloud of smoke and a few second later there was this boom and glass started blowing out of windows. At first I thought it was a terrorist incident. Nobody knew what was going on, people still don’t really know.”

The windows of the hotel where Colm’s wife and children were staying, 13km outside the city, were also shattered by the force of the blast. The family’s eighth floor apartment, which like many other residences consists predominantly of glass windows, was seriously damaged.

“Everyone is shook up and thinking about what’s the next step. We won’t be able to go back to our apartment for about two months. Thousands of apartments need to be fixed. Beirut is a resilient place but it’s been a strange year with the uprising in October, the economy collapsing, coronavirus and now this.”