US to send highest level official to Taiwan in four decades 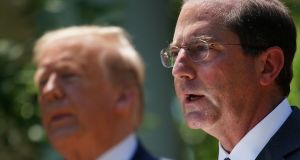 US health secretary Alex Azar speaking in the Rose Garden of the White House on May 15th as Donald Trump looks on. Photograph: Mandel Ngan/AFP via Getty Images

The US is sending the highest level cabinet official to Taiwan since cutting diplomatic ties with Taipei 41 years ago, reflecting rising support for the country in Washington in the face of growing Chinese aggression.

US health secretary Alex Azar will lead a delegation to Taipei “in the coming days”, he wrote on Twitter, in the midst of a push by the Trump administration to adopt a tougher approach to China. Beijing claims Taiwan as its territory and has threatened to invade if Taipei refuses to come under China’s control indefinitely.

“Beijing will no doubt be very displeased but it has devalued the currency of its anger to an extent in 2020 through overuse,” said Mark Harrison, a Taiwan expert at the University of Tasmania. “Beijing may well understand the visit in the context of the uncertain election outcome in the US in November and will no doubt be looking towards 2021 in any responses it makes.”

Washington has made efforts to deepen its contacts with Taiwan in recent years against a backdrop of rising tensions with Beijing. Congress has encouraged US officials to meet members of the Taiwanese government and help Taipei strengthen international ties and participation in global organisations.

The marked shift of tone led to president Tsai Ing-wen being allowed to give a speech at Columbia University in 2019 and vice-president William Lai to visit Washington this year, the first visit to the US capital by a high-level Taiwanese politician since 1979.

“Sending health and human services secretary Alex Azar to Taiwan at this time is a logical next step for the Trump administration,” said Gerrit van der Wees, a former Dutch diplomat who teaches Taiwan history at George Mason University. “Azar was in the forefront of the effort to get Taiwan to attend the World Health Assembly in Geneva in May 2020, and US foreign policy officials have repeatedly lauded Taiwan for the way it handled the coronavirus crisis.”

Wang Wenbin, a spokesman for the ministry of foreign affairs, told reporters on Wednesday efforts by Washington to engage more closely with Taipei were “doomed to fail”.

“China firmly opposes the official communication between the US and Taiwan,” he added.

Mr Azar praised Taiwan as “a model of transparency and co-operation in global health during the Covid-19 pandemic and long before it”. He added that he would “convey President Trump’s support for Taiwan’s global health leadership and underscoring our shared belief that free and democratic societies are the best model for protecting and promoting health”.

Washington’s support for Taiwan has been driven by senior officials in the White House, the state department and the Pentagon and won bipartisan support in Congress.

Mr Trump took a congratulatory call from Ms Tsai after his election as president in 2016, a move that sparked Chinese outrage. But he has showed little inclination since then to support Taiwan for the sake of democratic values.

According to the book by John Bolton, Mr Trump’s former national security adviser, the president described the significance of Taiwan by comparing it to the tip of his pen and then comparing China to his Oval Office desk. – Copyright The Financial Times Limited 2020