‘It was cowardly, wrong and terrible,’ Stephan Ernst said in his second confession 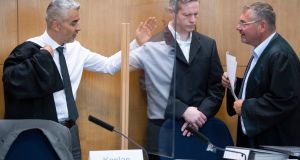 Stephan Ernst, who is accused of murdering politician Walter Luebcke, stands between his lawyers before a hearing in his trial last week in Frankfurt, Germany. Photograph: Boris Roessler/ Pool/Getty Images

A self-described German neo-Nazi has admitted – for the second time – to shooting dead a regional politician at point blank range last year.

Stephan Ernst (46), from the southwestern state of Hesse, told a court where he is standing trial for murder that he shot Walter Lübcke (66) on June 2nd of last year.

Ernst admitted to the killing shortly after his arrest last June, but subsequently revoked his confession.

“It was cowardly, wrong and terrible,” said Ernst in his second confession, read out in court by his lawyer. “I cannot undo what happened. I accept responsibility.”

Lübcke was a regional council leader in the city of Kassel and his fatal confrontation with Ernst, late at night on the terrace of his home, was their second encounter.

“Whoever does not support these values can leave this country any time, if he doesn’t agree,” said Lübcke to the meeting, according to other attendees.

Outraged by his views, the bill of indictment says Ernst “crept up on his victim and shot him in head from a short distance with a Rossi revolver”.

Lübcke’s son found his father dead in a pool of his own blood at his home in Wolfhagen-Istha in the federal state of Hesse. The first killing of a politician in post-war Germany caused outrage, and prompted tighter security for leading public figures.

Ernst was arrested after DNA evidence linked him to the crime scene but his defence lawyer urged him to revoke his confession.

In the early days of the trial, his lawyer claimed an alleged accomplice, identified as Markus H and also on trial accused of procuring the gun, got into an argument with the politician and shot him by mistake.

But it is not clear if Markus H was even at the scene. Ernst, described by prosecutors as a neo-Nazi extremist motivated by “racism and xenophobia”, fired his defence lawyer after multiple rows and, on Wednesday, admitted he was the gunman.

He said on June 2nd last year he and Markus H confronted Lübcke on his terrace. The politician tried to stand up, they pushed him back into his chair and ordered him not to move. When the politician shouted “Get lost”, Ernst said he shot him.

Judge Thomas Sagebiel, who clashed with the defendant’s counsel during the trial, told him on Wednesday that an early show of remorse could have an effect on his sentence.

In a statement read by his second lawyer, repeating “I’m sorry” three times, Ernst said it was “inexcusable what I have done to the Lübcke family”. He asked to be admitted to an exit programme for radicalised neo-Nazis and appealed for his estranged daughter to contact him.

“I hope that, one day, she will forgive me,” he added.