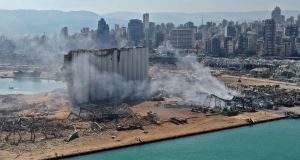 An aerial photograph shows the huge damage done to Beirut port’s grain silos and the area around it, on Wednesday. Photograph: AFP via Getty Images

The massive explosion in Beirut’s port could not have come at a worse time for Lebanon. Buildings and window glass have been shattered across the capital and its suburbs, burdening householders with costly repairs while they struggle to feed their families.

The situation is so dire that Save the Children has reported that a million residents of greater Beirut can no longer afford basic necessities and predicted children could starve to death this year.

According to official Lebanese figures, the countrywide poverty level approaches 50 per cent and unemployment is at 35 per cent. The Lebanese currency has lost 80 per cent of its value and inflation is soaring.

The devastation wrought at the port instantly inflicted harm on Lebanon as 90 per cent of food and medical imports normally flow through Beirut to the country. Halting imports for even a few days can create shortages and bottlenecks and send prices soaring, depriving already stressed Lebanese of essentials.

The blasts destroyed grain silos filled with wheat to be baked into the bread that graces every Lebanese meal. Since Beirut port will be out of action for the foreseeable future, the smaller port in the northern city of Tripoli will become the gateway for imports.

The explosion could have security repercussions. Among the ships docked at Beirut port was a UN maritime task force vessel which was damaged and its crew injured. The task force’s primary duties are to prevent clashes between Lebanese and Israeli vessels and intercept banned arms shipments.

The explosion took place when the task force should be operating at full strength. Tensions are high between Lebanon and Israel, which remain in a state of war, due to incidents on the southern border involving Hizbullah fighters and the Israeli army.

While prime minister Hassan Diab has vowed those “responsible for this catastrophe will pay the price”, few Lebanese believe him. He has pledged to initiate meaningful reforms, tackle graft, secure International Monetary Fund and foreign financial assistance to end Lebanon’s economic meltdown, and contain Covid-19. He has failed to deliver on all fronts.

Last week, foreign minister Nasif Hitti resigned, citing the “absence of a vision for Lebanon [and] the absence of an effective will to achieve comprehensive structural reform”. He told Al-Nahar daily that Lebanon was becoming a “failed state” and urged politicians to focus on the national interest.

His comments reflected the views of millions of Lebanese citizens who have protested against mismanagement and corruption since last October and called for an end to the country’s entrenched sectarian political system.

Since Tuesday’s blasts are likely to deepen divisions among politicians and between politicians and the people, Lebanese can be expected to step up protests. They have learned that port officials had repeatedly warned of the threat posed by 2,700 tonnes of highly explosive ammonium nitrate, but no action was taken.

The material was unloaded and warehoused in 2014 after a Moldovan-flagged ship bound for Mozambique was found unseaworthy and its cargo confiscated. The ship was subsequently abandoned by its crew and owners.

The blasts took place ahead of Friday’s verdict of the international tribunal created to try in absentia four Hizbullah members accused of the 2005 assassination of ex-prime minister Rafik Hariri.

While a verdict of premeditated murder has long been expected, this could exacerbate domestic tensions by sharpening existing animosities between the two main political blocs: the Sunni-Christian coalition led by Saad Hariri, son of the murdered leader, and the Shia-Christian alliance formed by President Michel Aoun and Hizbullah.

If material and financial aid does not arrive quickly, Diab’s faltering government could fall, plunging Lebanon into political limbo and risking serious unrest.