Hizbullah leader warns that protests could push Lebanon into chaos 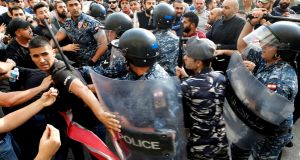 Supporters of Hizbullah, an Iranian-backed group with widespread influence in Lebanon, scuffled with anti-government protesters who have been on the streets for days, angered by corruption and the near collapse of the economy.

Mr Nasrallah rejected the demonstrators’ calls to bring down the government. The country endured a catastrophic civil war between 1975 and 1990.

“We do not accept the fall of the presidency nor do we accept the government’s resignation and we do not accept, amid these conditions, holding early parliamentary elections,” Mr Nasrallah said.

Praising the protest movement for achieving “unprecedented” economic reforms announced this week, he said Lebanon must now search for ways to move forward and prevent a dangerous power vacuum.

Mr Nasrallah is considered one of the country’s most influential figures. Hizbullah, a Shia group, has a presence in government and a well-armed militia that has fought in Syria for President Bashar al-Assad.

The protests that have paralysed Lebanon took a more violent turn on Friday when groups supporting Hizbullah pushed into a peaceful demonstration in Beirut, scuffling with protesters and forcing riot police to intervene.

Two protesters were wounded in the scuffles, Lebanon’s Red Cross said. Riot police with masks and batons were dispatched to the square to defuse the situation as people began hurling stones and sticks.

The scuffles came just an hour before Nasrallah spoke in a television broadcast.

For a ninth day on Friday, Lebanon saw protests that have cut roads, closed schools and shut banks nationwide.

Emergency reform measures and an offer of dialogue with protest representatives by the president have so far failed to defuse anger or persuade people to leave the streets.

The protests have been fuelled by dire economic conditions and anger at the political elite accused of mismanagement of funds and plundering state resources for personal gain.

Credit rating agency Standard & Poor’s said the government’s limited ability to address the demonstrators’ demands could harm confidence in the banks and have an adverse effect on foreign exchange reserves.

Lebanon’s banking association has held crisis meetings with the central bank governor and president in recent days in search of a way to reopen banks amid growing fears that a rush on them could deplete already dwindling foreign currency deposits.

“Right now we’re using the pretext of the demonstrations not to open. We are afraid that when we open people will rush to withdraw their money or transfer it abroad,” said one senior banker.

He said banks were looking to come up with a common policy to meet the needs of customers and that the central bank governor has so far avoided capital controls that would likely stop expatriates from sending remittances.

As politicians ponder ways out, the clock is ticking because of financial strains in Lebanon, one of the world’s most heavily indebted states.

Exacerbating the economic situation, capital inflows needed to finance the state deficit and pay for imports have been slowing down, generating financial pressures not seen in decades, including the emergence of a black market for dollars.

The government this week announced reforms that include a one-time tax on bank profits and cuts to salaries of top officials, saying the measures would narrow the 2020 budget deficit to 0.6 per cent. – Reuters