Peronists set for return in Argentina as Macri magic fades 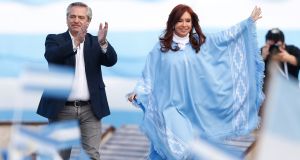 In 2017 there was so much market enthusiasm for Argentina’s prospects under President Mauricio Macri that eager investors called on his administration to issue a 100-year bond.

Despite the fact the country had previously defaulted on its sovereign debt eight times, the duly issued century bond was heavily oversubscribed. Now just two years later, its value has nosedived and the spectre of default once again haunts the South American state.

The first democratically elected right-wing president in Argentina’s history, Macri faces being ejected from office after just one term. He is seeking re-election on Sunday but a primary held in August and nearly all opinion polls since point to voters delivering a withering verdict on his four years in power.

Having promised to put the country’s economy on the path to sustainable growth after decades of ruinous populist policies, Macri has instead witnessed his gradualist approach to tackling the rampant inflation, yawning fiscal deficit and stagnant growth rate he inherited collapse in failure.

Instead of recovery, he has had to impose price controls as inflation spirals out of control and issue a humiliating request for help to the International Monetary Fund, loathed in Argentina because of its role in previous crises, in order to shore up the peso.

“In retrospect, Macri should have tackled the economic issues more aggressively right away. But initially it seemed there was no reason to. The world was a different place and markets gave him the benefit of the doubt. But then the US Fed raised rates, the tide turned against it and Argentina was too weak to resist,” says Alberto Bernal, a Latin America economist with brokerage house XP Securities.

With Macri’s credibility on the economy in ruins and unemployment and poverty on the rise, Argentines are now likely to turn back to the country’s populist Peronist party, the very movement many economists and historians blame for the country’s long decline.

Leading opinion polls by as much as 20 points is Alberto Fernández.

Though he is from the moderate wing of Peronism, his predicted victory has spooked investors because his vice-presidential running mate is Cristina Kirchner.

Macri’s predecessor and Fernández’s former boss, Kirchner had eight years in power and they were marked by reckless populist policies and a combative approach to politics. As such she stands in contrast to Fernández who is known as a conciliator and skilful negotiator with economic sectors traditionally antagonistic to Peronism. The two fell out in 2008 when Fernández left her administration and the renewal of their alliance earlier this year caught the country by surprise, nobody more so than Macri who was denied a direct match-up with the polarising Kirchner.

A recent opinion poll showed 45 per cent of Argentines think Cristina Kirchner will be the real power in a new administration should the Peronist ticket win on Sunday, with 74 per cent of Fernández’s supporters saying they are voting for him because of his running mate.

But Kirchner has been largely absent from the campaign trail, maintaining a low public profile in recent months during which she has devoted much of her time to caring for her daughter, Florencia, who is receiving medical treatment in Cuba.

Some have speculated that, facing multiple corruption accusations, she is more interested in the four more years of parliamentary immunity she will have should her party win than in exercising power.

Nevertheless an increasingly desperate Macri has sought to remind Argentines of the economy’s ruinous state when Kirchner left office in 2015. But having seen his own economic strategy unravel, few appear to be listening. Instead it is the mercurial Peronists, the country’s dominant political force for 75 years, to whom voters look set to turn to once again.

Across the river Plate estuary, Uruguay also holds a presidential election on Sunday with polls pointing towards a run-off round next month between Daniel Martínez of the ruling left-wing Broad Front alliance and Luis Lacalle Pou of the conservative National Party. In his first run for the presidency, Martínez is seeking to win a fourth consecutive term in power for the Broad Front.