Police say nationality of 39 deceased was ‘now a developing picture’ 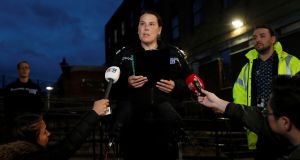 Deputy Chief Constable Pippa Mills of Essex Police said the force would give no more details about the nationalities of the victims until formal identification had taken place. Photograph: Peter Nicholls/ Reuters

Four Irish people are being questioned by police in Britain over the deaths of 39 people found in a truck.

On Friday, police said they had arrested a fourth person over the deaths. The 48-year-old from Northern Ireland was arrested by police at Stansted Airport, London, on suspicion of conspiracy to traffic and manslaughter.

A man and a woman, both aged 38, who were arrested in Warrington, northern England, on Friday, are believed to be Irish. They are in custody also on suspicion of conspiracy to traffic people and on suspicion of manslaughter.

The driver of the truck, a 25-year-old man from Northern Ireland, remains in police custody having already been arrested on suspicion of murder.

Essex Police initially believed all of the victims, eight women and 31 men, were Chinese nationals, but the force has walked back on this, saying at a press conference on Friday evening that “this is now a developing picture”.

Deputy Chief Constable Pippa Mills said the force would give no more details about the nationalities of the victims until formal identification had taken place.

The trailer in which the 39 people were found dead in England earlier this week was leased from one Irish company to a second business also run from the Republic, The Irish Times has learned.

Monaghan-based GTR Europe confirmed it owns the refrigerated trailer in a statement on Thursday. It is understood the company leased the trailer on to a second entity, also based in the Border region, with which it had a pre-existing business relationship.

It was, however, the first time such a leasing deal had been struck between the pair.

Gardaí suspect the Northern Irish truck driver (25) being held by Essex Police was driving for this second company, which is legally registered in Bulgaria, but in reality is based in the Republic, when he collected the trailer the bodies were later found in.

It remains unclear where and when the victim got into the refrigerated trailer, if they had assistance, and if anyone knew they were there before the trailer was opened in Grays, Essex, in the early hours of Wednesday and the bodies were found.

The Guardian reported on Friday that a family in Vietnam fears that one of the 39 people found dead was their daughter, Pham Thi Trà My. The family later told the BBC they had paid £30,000 for her to be smuggled to Britain, which has now been repaid. The BBC also reported that Nguyen Dinh Luong (20) was also feared to be among the 39 victims.

VietHome, an organisation for the Vietnamese community, said it had received news from 10 families that their loved ones were missing. Hanoi’s London embassy was co-ordinating with British police, the official Vietnam News Agency reported.

Meanwhile, Chinese foreign ministry spokeswoman Hua Chunying told a daily news briefing: “We hope that the British side can as soon as possible confirm and verify the identities of the victims, ascertain what happened and severely punish criminals involved in the case.”

The Irish Times has learned that GPS data gleaned from a device fitted to the trailer shows it did not travel far into continental Europe in the period leading up to the discovery of the bodies.

A source said the GPS data from the refrigerated unit shows that it left Monaghan on October 15th, before crossing into Northern Ireland, and then back into the Republic. The data shows it travelled from Dublin to the UK overnight on the 16th, before crossing over to continental Europe that evening.

Once it was on the continent, it appears to have travelled between cities in Belgium and France, including Dunkirk, Bruges and Lille. A source said the data indicates it also travelled back and forth between the UK and continental Europe in this period, between October 17th and 22nd, when it made its final journey from Zeebrugge to Purfleet. The bodies were discovered hours later.

The data suggests that the trailer did not travel beyond western Europe during the timeframe when the migrants may have entered the container, and they may have been trafficked to one of the locations where the trailer was tagged by GPS.

The data is understood to have been shared with Essex Police, which is leading the investigation.

In a statement released on Wednesday, GTR Europe confirmed it was the owner of the refrigerated trailer, but that it was unaware that the trailer was to be used in the manner which it appears to have been.

“The company has been in contact with police in Essex from early 23rd of October, immediately upon becoming aware that a trailer on lease from this company had been involved in this incident. Full details of the lessee have been given to the police,” a spokesman said. He also confirmed that all the trailers leased by the company are fitted with tracking devices.

Garda sources had previously said no evidence of any Irish involvement in the circumstances that led to the deaths had been found.

Essex police were on Thursday granted an additional 24 hours to question the lorry driver arrested at the scene of the discovery, and inquiries broadened to involve the authorities in Ireland, Belgium and China.

Police were preparing on Thursday night to remove the first of the victims from the dockyard warehouse where the vehicle was being examined and take them by ambulance to hospital in Chelmsford, where postmortems were to be carried out.

It was initially suspected that the victims had been trafficked into Britain through the Republic, passing through two Irish ports. But the Garda and Essex Police later ruled out that possibility. – Additional reporting Reuters/PA/Guardian