Essex trailer deaths: What we know so far 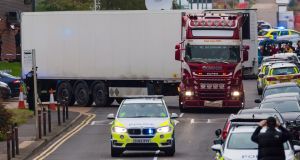 Police move the truck and trailer from the scene in Waterglade Industrial Park in Grays to nearby Tilbury Docks to remove the bodies. Photograph: EPA/Vickie Flores

– Thirty-nine bodies were discovered in a trailer behind a truck at an industrial park in Grays, Essex, by the ambulance service at 1.40am on October 23rd.

The driver Maurice Robinson (25), who lives in Co Armagh, was arrested at the scene.

– Mr Robinson was not asked to indicate a plea and will next appear at the Old Bailey on November 25th for a plea and trial preparation hearing.

– Three other Irish people, arrested on Friday, October 25th, were released on bail on October 27th. Essex Police said a couple, both 38, from Warrington and a man (45) from Northern Ireland arrested at Stansted Airport had been freed following two days of questioning.

– Essex police are keen to interview a fifth suspect who is suspected of taking part in the trafficking of 39 migrants. This man from Northern Ireland is suspected of transporting a trailer containing 39 migrants to a port in Belgium before it was ferried to Britain. Belgian authorities confirmed on Sunday that this man, who is in his 20s, is the same person they have been searching for.

– A European Arrest Warrant has already been issued for this man and is expected to be executed this week.

– Essex police initially though the 39 dead were all Chinese nationals but a number of people from Vietnam are now understood to be among the dead. Efforts to identify the victims are ongoing.

– The trailer travelled from Zeebrugge, Belgium, into Purfleet, England, and docked nearby in the Thurrock area shortly after 12.30am on October 23rd.

– The driver collected the trailer from Purfleet at about 1.05am and the alarm was raised in Grays about 30 minutes later.

– Forensic police examined the truck at the scene and later escorted it to Tilbury Docks.

– GPS data gleaned from a device fitted to the trailer shows it left Monaghan on October 15th, before crossing into Northern Ireland, and then back into the Republic. The data shows it travelled from Dublin to the UK overnight on the 16th, before crossing over to continental Europe that evening.

– Once the trailer was on the continent, it travelled between cities in Belgium and France, including Dunkirk, Bruges and Lille. It also travelled back and forth between the UK and continental Europe in this period, between October 17th and 22nd, when it made its final journey from Zeebrugge to Purfleet

– Alongside the murder inquiry, a parallel investigation begins to examine whether organised crime networks played a role. It is the prosecution case against Mr Robinson that he was part of a wider smuggling network.

– The truck which collected the trailer in Purfleet was registered in Varna, a city on the east coast of Bulgaria. The Bulgarian authorities say the truck has not been in the country since 2017.

– The trailer was leased from Co Monaghan-based Global Trailer Rentals Ltd to a second entity, also based in the Border region, with which it had a pre-existing business relationship.Gardaí suspect Northern Irish truck driver was driving for this second company.