Hunter is killed by deer he believed he had shot dead 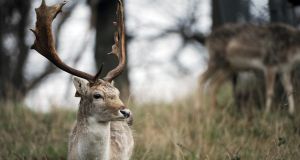 A hunter in the US died after he was attacked by a deer he had shot which he believed to be dead. File photograph: Aidan Crawley/The Irish Times

A hunter in the US died after he was attacked by a deer he had shot which he believed to be dead.

Thomas Alexander shot a buck while hunting near Yellville, an area in the Ozark Mountains about 169km north of Little Rock, according to Arkansas Game and Fish Commission spokesman Keith Stephens.

Mr Stephens said the buck attacked the 66-year-old when the hunter approached the animal after shooting it.

Mr Stephens said it is not clear how long Mr Alexander waited before checking on the deer, but that the agency recommends waiting at least 30 minutes before approaching. – AP