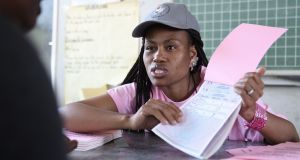 A polling officer explains the ballot paper to a voter at the Ntebogang Community Junior School polling station in Kanye, in Botswana. Photograph: Monirul Bhuiyan/AFP

The ruling Botswana Democratic Party has been declared the winner of the African country’s general election, overcoming an opposition coalition backed by former president Ian Khama, who recently left the party.

Chief justice Terrence Rannowane announced on Friday that after 73 per cent of the votes from the October 23rd parliamentary poll had been tallied, results showed the BDP had won a majority of the 57 seats in Botswana’s national assembly.

This means that Botswana’s incumbent president Mokgweetsi Masisi – the leader of the BDP – has secured a fresh five-year mandate, as the winning party’s presidential candidate is automatically appointed to the government’s top post.

The BDP’s biggest rival, the Umbrella for Democratic Change (UDC), has yet to concede the election, which many observers expected to be the tightest the country has witnessed since the ruling party first came to power in 1966, after securing independence from British colonial rule.

The opposition parties’ acceptance of the result is now seen as a key test of Botswana’s democracy, which has been praised internationally in recent decades as an African success story. In 2018, Transparency International rated Botswana as the second least corrupt country in Africa after the Seychelles.

Prior to the vote, the UDC said the election process was not credible, and it accused the BDP of paying for votes and using the intelligence services to undermine opposition parties.

Tensions had also been running high in the run-up to the poll because of a major feud that broke out between the 66-year-old Mr Khama – who resigned as Botswana’s president in 2018 after 10 years in power – and Mr Masisi, his handpicked successor.

After taking office, Mr Masisi (58) reversed a number of Mr Khama’s key policies, including lifting a ban on elephant hunting, which infuriated the former president to the point that he left the BDP entirely in early 2019.

In the months leading up to the election, Mr Khama accused his successor of being autocratic and proceeded to back the UDC, which was once his biggest critic. He then threw his support behind the newly formed Botswana Patriotic Front (BPF), which went into an electoral alliance with the UDC.

In an interview with South Africa’s Eyewitness News on Wednesday, Mr Khama confirmed he had abandoned the ruling party at the polls this week and voted for the BPF because Mr Masisi had become “drunk on power”.

At the time of the chief justice’s announcement on Friday morning, the BDP had won 29 seats, the UDC had 13, the Khama-backed BPF had three, and the Alliance for Progressives had one, which left 13 seats to be filled.

About 931,000 of Botswana’s 2.2 million people were registered to vote in Wednesday’s parliamentary and local elections.