Egyptians go to polls with concern about voter apathy

With opponents of Abdel Fattah al-Sisi forced to stand down, presidential election is no contest 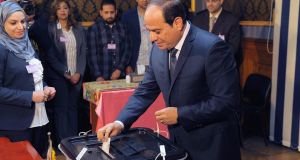 Egyptian president Abdel Fattah al-Sisi casting his ballot during the first day of the presidential election at a polling station in Cairo on Monday. Photograph: EPA/Egyptian Presidency

Egyptians began casting ballots Monday in a three-day, no-contest presidential election predestined to grant incumbent Abdel Fattah al-Sisi another four-year term. The avenues and streets of Egypt’s cities and towns have been festooned with his portraits and campaign banners and television coverage filled with his praises although his sole rival, Moussa Mustafa Moussa, poses no challenge.

Moussa, who heads the emasculated Ghad party, formally proposed Sisi and pledged the party support but he was clearly pressured, at the last moment, to enter the race. He registered his candidacy with the election commission just 15 minutes before the deadline and staged only two rallies, made no appearances on television and had no money to buy newspaper advertisements.

Other serious candidates, including three former senior military figures and a respected human rights lawyer, were either detained or intimidated into standing down.

Although running against a man of straw, Sisi launched an aggressive campaign because he seeks a new mandate based on high turnout. When he ran against a single rival in 2014, Sisi secured 96.1 per cent of the vote. At the time of that election, Egypt was gripped with “Sisi mania” as he was seen as the man who could crush radical fundamentalist and Muslim Brotherhood violence, fix the economy, and deliver the demands of the 2011 uprising: “Bread, Freedom, and Justice.”

Participation was 47.5 per cent of registered voters, which was low for a third-world country eager for a strong leader, but high for Egypt.

Unfortunately, Sisi has failed to quell the Islamic State (Isis) insurgency in northern Sinai, where jihadis mount attacks on the army and police. A November 2017 bombing of a mosque killed more than 300, the worst terror incident in modern Egyptian history. Jihadis also invade Egypt “proper” to strike Coptic Christian churches and other targets.

To qualify for a $12 billion International Monetary Fund loan, the government has floated the weak Egyptian pound and cut subsidies. Bread is now more expensive for the poor; 25 per cent of the population lives below the poverty line, while another 15 per cent manages to scrape along.

Sisi has prioritised costly monumental projects – expanding the Suez canal and constructing a new administrative capital – that do not benefit the majority of Egyptians.

Sisi has jailed radical jihadis, Muslim brothers and liberal dissidents and critics and cracked down on the media. There is little freedom in Egypt.

The courts have cleared former president Hosni Mubarak and his associates of corruption and released them from detention. There is precious little justice in Egypt these days.

Disillusioned and apathetic voters have no option but to reappoint Sisi in an election he transformed into a referendum.