The Chinese defense ministry has condemned the United States for "serious political and military provocation" after one of its warships entered waters near an island claimed by China in the South China Sea. Video: CCTV 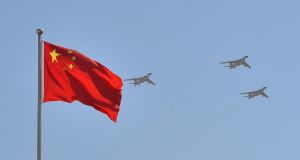 H-6K bombers flying during a military parade in Xilingol League, Inner Mongolia autonomous region of China, on July 30th, 2017. The H-6K bomber carries the DH-20 land-attack cruise missile, giving it the ability to hit targets as far away as Australia. Photograph: Cui Nan/VCG via Getty Images

Chinese fighter jets and bombers have carried out manoeuvres in disputed areas of the South China Sea and the western Pacific, the air force said, and also passed through Japan’s southern islands.

The “joint combat patrols” featured some of the People’s Liberation Army’s most advanced aircraft, including H-6K long-range strategic bombers and Russian-built Su-30 and Su-35 fighters.

“The PLA Air Force will continue to safeguard national sovereignty and security, as well as support the country’s peaceful development through high-sea training and combat patrol missions,” spokesman Shen Jinke said in a statement on the air force’s microblog.

The aircraft flew across the Miyako Strait, south of Japan and northeast of self-ruled Taiwan, which China insists is part of its sovereign territory, and it was “in line with international law and practice”.

“Air force exercises are rehearsals for future wars and are the most direct preparation for combat,” Mr Shen said.

China was unhappy about a new law recently passed in Washington boosting ties with Taiwan and the more militant state media have called for military force to put pressure on the island.

The H-6K bomber carries the DH-20 land-attack cruise missile, giving it the ability to hit targets as far away as Australia. The only other countries able to launch cruise missiles from the air are Russia and the US.

The deployment of Su-35 fighters over the South China Sea aims to help increase the air force’s ability to fight far out at sea, the air force said.

President Xi Jinping has made modernisation of the People’s Liberation Army one of the main planks of his government.

The more exercises China practices far from its shores, the better it will be as “an important force for managing and controlling crises, containing war and winning battles”, the statement said.

There are strains with China’s neighbours in the region such as Brunei, Malaysia, the Philippines, Vietnam and self-ruled Taiwan, over China’s territorial disputes in the South China Sea.

Last week, a US Navy destroyer came within 12 nautical miles of Mischief Reef in the Spratly Islands, an island chain also claimed by the Philippines, on which China has built an artificial island.

The operation prompted an angry response from the defence ministry in Beijing, which described it as a “serious political and military provocation against China”.

The US describes these as “freedom of navigation” operations and they are in defiance of China’s claims to nearly all of the South China Sea, through which about €4.75 trillion in trade passes every year.

Beijing has dismissed a finding by an international tribunal in The Hague rejecting China’s claims.

1 Tony Holohan stepping back from role as chief medical officer
2 Coronavirus: Rise in transmission in Ireland sparks concern
3 Several factors pushing Boris Johnson towards a Brexit deal with Brussels
4 Bobby Storey: The IRA's planner and enforcer who stayed in the shadows
5 A ‘rock’ and a ‘patriot’: Tributes paid to Tony Holohan as he steps back
Real news has value SUBSCRIBE