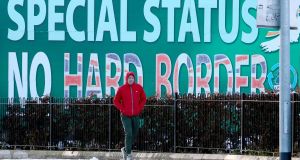 The survey was carried out amid ongoing uncertainty over how the Irish Border will be handled in the final Brexit agreement. Photograph: PAUL FAITH/AFP/Getty Images

More voters in Great Britain rate leaving the EU as a priority ahead of maintaining the union with Northern Ireland, a poll has suggested.

More than a third of those polled (36 per cent) said exiting the European Union was a higher priority than keeping Northern Ireland within the UK.

Of those surveyed, 29 per cent said retaining Northern Ireland within the UK was more important than Brexit.

Around 22 per cent said neither was important, while the remainder said they did not know which one to prioritise higher.

The YouGov poll, commissioned by radio station LBC, did not survey voters within Northern Ireland. The online poll sampled 1,630 adults living in Great Britain. It was conducted between March 21st and 22nd.

The survey was carried out amid ongoing uncertainty over how the Irish Border will be handled in the final Brexit agreement. It has emerged as the key sticking block in the negotiations, with the UK government and EU at loggerheads over how a free flowing border can be maintained if the UK leaves the Customs Union and Single Market.

“The Good Friday Agreement states very clearly that the principle of consent means that it’s for the people of Northern Ireland alone to decide whether we remain part of the United Kingdom,” he said.

“Since the UK government, the Irish government and Brussels have all said that any Brexit agreement must fully recognise all of the terms of the Good Friday Agreement, I really don’t think this is relevant.”

The poll also found that almost half (48 per cent) of the GB public are pessimistic that the UK will be ready to leave the European Union by March 2019. Of those, more than a quarter (26 per cent) were Leave voters.

Around four in 10 people surveyed (39 per cent) said they were optimistic the UK would be ready for Brexit day, while the remaining 13 per cent say they did not know. – PA

1 Archaeologists are ‘quite sure’ they have found Red Hugh O’Donnell’s burial place
2 Coronavirus: No new Covid-19 deaths reported in State for first time since March
3 Coronavirus: What will reopen in Ireland’s phases to ease restrictions and what are the dates?
4 WHO warns of potential for ‘immediate second peak’ in Covid-19
5 Tributes paid to Ireland’s deputy ambassador to China who died on Sunday
Real news has value SUBSCRIBE