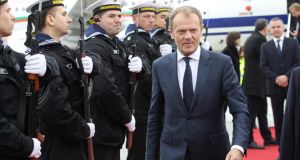 In a co-ordinated wave of demonstrations of solidarity with the UK over the Salisbury nerve agent attack, the US, 14 EU states, Canada and Ukraine have all announced the expulsion of Russian diplomats.

Ireland is said to be considering its position and the matter will come before the Cabinet on Tuesday.

The United States said on Monday it would expel 60 Russian diplomats, joining governments across Europe in taking action against the Kremlin for the nerve agent attack on a former Russian spy that Britain has blamed on Moscow.

Ukraine is to expel 13 diplomats, and Canada, Germany, Poland and France four each. Lithuania and the Czech Republic are each expelling three Russian diplomats, the Netherlands two, and Latvia and Estonia one each.

In a statement, Canada’s minister of foreign affairs, Chrystia Freeland, said it would expel four members of Russia’s diplomatic staff whom it has identified as “intelligence officers” or “individuals who have used their diplomatic status to undermine Canada’s security or interfere in our democracy”.

Three others who have applied to join the Russian diplomatic staff in Canada will also have their applications denied, Canada said.

The moves by EU members, all decided at national level, followed a statement by EU leaders at a summit on Friday that it was “highly likely” Russia was invllved in the attack in Salisbury on Sergei Skripal and his daughter Yulia. EU leaders also recalled the EU ambassador to Russia to Brussels for consultations.

Although the announcement of the expulsions on Monday by European Council President Donald Tusk during a vist to Bulgaria was co-ordinated, EU officials insisted the decisions were taken individually at national level. Additional measures including further expulsions “are not to be excluded in the coming days and weeks,” Mr Tusk said.

Moscow denies responsibility for the attack on Mr Skripal and his daughter. It has proclaimed its regret that the EU has “opted for following yet another anti-Russian campaign triggered by London and its transatlantic allies”.

On Monday Russia’s foreign ministry called the actions a “provocative gesture” and promised to respond.

The US state department said in a statement: “On March 4th, Russia used a military-grade nerve agent to attempt to murder a British citizen and his daughter in Salisbury. This attack on our ally, the United Kingdom, put countless innocent lives at risk and resulted in serious injury to three people, including a police officer.”

It called the attack an “outrageous violation of the Chemical Weapons Convention and breach of international law”. A US official said 48 of those to be expelled were attached to the embassy to the US, while 12 were accredited to the Russian mission at the UN.

British foreign secretary Boris Johnson tweeted that “Today’s extraordinary international response by our allies stands in history as the largest collective expulsion of Russian intelligence officers ever and will help defend our shared security.”

Prime minister Theresa May said the co-ordinated measures “clearly demonstrate that we all stand shoulder to shoulder in sending the strongest signal to Russia that it cannot continue to flout international law”. Additional reporting: Reuters