After all those years of criticising George W Bush on war, Donald Trump is now letting himself be guided by the former president’s most hawkish adviser 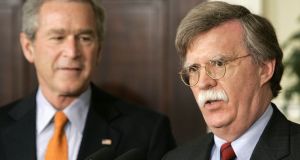 It’s unnerving covering a president who is treated like a boy king, requiring minders; who is easily swayed because he is underinformed; who can sit still long enough only for short oral briefings; who swaggers and mocks to mask his insecurities; who tries to replace real news with faux; and who can’t seem to fathom that distorting reality to suit political ends is dangerous.

It’s even more unsettling covering two Republican presidents who fit this description: George W Bush and Donald Trump. I watched in alarm as W, who had promised a “humble” foreign policy with no nation-building and who had been a bipartisan, genial Texas governor, shape-shifted into a hyperaggressive and belligerently unilateral president. His ego and inadequacies were expertly manipulated by his regents, Dick Cheney and Donald Rumsfeld, bureaucratic samurai with their own rapacious agendas.

A prodigal son who floated around drinking and partying until he was 40, W was an empty vessel filled up by the wrong people; iron-asses, to use his father’s epithet about the counsellors and neocons he felt hijacked his son’s presidency “real hard-charging guys who want to fight about everything and use force to get our way in the Middle East”.

Because the Dr Strangeloves treated W like a host body, we ended up in two tragically unending wars. In the bitter contest between the Rumsfeld Defence Department and the Colin Powell State Department, John Bolton was a Rummy person who was a fifth column at State, along with Liz Cheney. Like a walrus version of Wile E Coyote, he lived to dynamite treaties, alliances and anything with “global” or “multilateral” in the title.

He was known as the most undiplomatic diplomat ever, with a rip-their-eyeballs-out, foaming-at-the-mouth style. W nominated Bolton as UN ambassador, even though Bolton had once remarked that if the UN lost 10 storeys, “it wouldn’t make a bit of difference,” and even though the Senate Foreign Relations Committee was reviewing charges that he was using intimidation to distort key intelligence and buttress his hardline positions on Cuba and North Korea. He was accused of trying to fire intelligence analysts and buoying the phony case on WMDs in Iraq.

Bolton rejected the neocon label, preferring to see himself as a Goldwater conservative, but he helped the neocons and Cheney’s henchmen when they shovelled distortions into Secretary Powell’s UN speech making the case for war. His mistreatment of underlings was so legendary – one claimed he had thrown objects – that I once dubbed him the Naomi Campbell of the Bush administration. By far the best thing about the Trump campaign was watching many of those culpable for the Iraq War go ballistic trying to stop the neophyte, who kept pointing out that Americans had been deceived into the historic debacle with Iraq. He even went where no one else had dared and correctly pointed out that W and his administration had dropped the ball before 9/11.

Like other war hawks, Bolton didn’t want to serve himself, enlisting in the National Guard in 1970 to ensure he wouldn’t “die in a Southeast Asian rice paddy” in Vietnam

Bill Kristol, Eliot Cohen, Robert Kagan and Max Boot, all of whom pushed to “liberate” Iraq, denounced Trump, saying he would be a foreign policy disaster. Kagan and Boot said they would vote for Hillary Clinton. After lukewarm support for the invasion, Trump often criticised W on Iraq. “No matter how long we stay in Iraq, no matter how many soldiers we send, the day we leave, the meanest, most vicious, most brilliant man in the country, a man who makes Saddam Hussein look like a baby, will take over and spit on the American flag,” he told me in 2006. “Bush will go down as the worst and by far the dumbest president in history.”

Trump was a Hillary supporter in those days and said that although her vote to authorize the Iraq War was “horrendous”, she should be forgiven because “that decision was based on lies given to her”.

“She’s very smart and has a major chance to be our next president,” he told me. In 2013, Trump tweeted: “All former Bush administration officials should have zero standing on Syria. Iraq was a waste of blood & treasure.” When he ran for president against Jeb Bush, he continued attacking W and presenting himself as a noninterventionist, focus-on-America candidate.

But somehow, in his King George madness, Trump has circled back to elevate one of the chief Iraq War hawks to be his national security adviser. That move sent a shiver through the capital, among both Democrats and Republicans, who whispered, “Anyone but Bolton!” Bolton is a clever infighter. He learned from the best. He pushed to go to war in Iraq and still thinks it was a good idea, just as he has pushed to go to war in North Korea and get regime change in Iran and Syria. He is a fervent believer in pre-emptive war. (Like other war hawks, Bolton didn’t want to serve himself, enlisting in the National Guard in 1970 to ensure he wouldn’t “die in a Southeast Asian rice paddy” in Vietnam.)

The president who loves to push hot buttons and hire Fox analysts must really get a kick out of Bolton’s tempestuous style if he is now willing to overlook the 69-year-old’s unruly moustache and frightening faith in pre-emption. After all those years of criticising W on war, Trump is now letting himself be guided by W’s most hawkish adviser.

And the president, whose curiosity only extends to himself, seems determined to stay an empty vessel. That makes him, like W, a magnet for extremists who want to hijack the Oval.