Conservatives on brink of landslide victory in Iranian elections

Many of senior conservatives are former supporters of Mahmoud Ahmadinejad 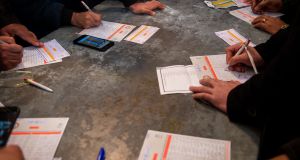 Voters fill in their ballot papers during the general election in Tehran, Iran, on Friday. Photograph: Ali Mohammadi/Bloomberg

Iran’s conservatives are on the brink of a landslide victory in the country’s parliamentary elections as forecasts show them taking more than two-thirds of the seats.

The reformists, the largest grouping in the outgoing parliament, have been decisively beaten, with predictions showing them taking only 17 seats in the 290-strong parliament. The principalists – or conservatives were on course to take around 200 seats, including all 30 seats in the capital, Tehran, previously a stronghold of the reformers.

Although they are a diverse group, many of the senior conservatives are former supporters of ex-president Mahmoud Ahmadinejad. The result is a rebuff for those that had pushed for greater engagement with the west, and is likely to constrain Iran’s foreign policy options. The parliament could press for Iran to quit the nuclear non-proliferation treaty.

In Tehran, where turnout was low, at between 20 per cent and 25 per cent, the response to the early results was not one of surprise, given the number of reformist candidates disbarred from standing,

Mojtaba Rezai, a mechanic, said “They are just a bunch of gangsters. They just choose between the 10 of them who is going to lead their list and we get no say. They are not lists, but sh*ts.”

In north Tehran around the Cinema Museum, the mood was indifferent, as people said they knew no one in their family that had voted, nor intended to vote again.

A shopper in central Tehran laughed when asked if they had heard the results, saying: “Why should we wait for the result? It is a foregone conclusion and has been fixed in advance. They can do what they want, and we just have to get on making a living. We face years more of sanctions.”

The rial was coming under further pressure against the dollar after the blacklisting of Iran by the Financial Action Task Force on Friday.

Mostafa Tajzadeh, one of the most prominent reformist politicians, who was formerly imprisoned in Evin prison, said: “We are facing a difficult and complex situation made worse by the low levels of participation. Why did the supreme leader not warn the Guardian Council against not allowing independent and critical voices to stand? The price has been low participation, and a parliament that only represents the minority.”

Other more radical voices said the landslide was what they wanted since it showed the people they had no route through parliament to achieve change.

The value of the democratic verdict, already sabotaged by the mass disqualification of reformists, will be further undermined if the turnout is as low as some predict. Turnout was 64 per cent in 2014 and 62 per cent in 2016. The lowest turnout – 51 per cent – was in 2004.

The deadline for closing the 55,000 polling booths on Friday was repeatedly extended, with pro-government sources claiming the polls were kept open until midnight to cope with high turnout. Government opponents said officials had been hoping a last-minute rush might mask a voter boycott in the big cities caused by disillusionment with Iranian politics.

The run-up to the election, dismissed as a farce by the US government, had been marred by the mass disqualification of best known centrist candidates, some of whom, such as Ali Motahari, nevertheless turned out to vote in Tehran.

The result means strong supporters of Ayatollah Ali Khamenei now control all the main levers of power in Iran except for the presidency. The reformists, elected four years ago on a ticket of engagement with the west, had been the largest party in the parliament, but found many of their proposals blocked by other centres of power in Iran, notably the Guardian Council.

Presidential elections are due next year, leaving the centrist incumbent, Hassan Rouhani, to navigate a difficult year engaging with a strong, largely unsympathetic parliament.

The initial results showed that as many as 14 senior figures in Ahmadinejad’s presidency had been elected, as well as his former central bank governor.

The former mayor of Tehran, Mohammad Bagher Ghalibaf, an Iran-Iraq war veteran and former commander of the Islamic Revolutionary Guard Corps was also victorious in Tehran, putting him in a strong position to take over the parliament’s speakership.

That post had previously been held by Ali Larijani who stood down preparing for a likely run at the presidency.

Mr Ghalibaf has said only 30 per cent of the country’s economic travails are caused by sanctions, saying mismanagement of the economy is the chief culprit. Principalists claim the Reformers have tried to interfere in the economy excessively, and want Iran to look to its neighbours to boost trade, rather than Europe.

Reformers have threatened to pursue Mr Ghalibaf over property deals from which he benefited as mayor of Tehran.

About 7,150 candidates from more than 16,000 hopefuls survived screening by government-run panels and the Guardian Council, a conservative body of clerics and jurists who assess commitment to Islam, belief in the system of religious law and the Islamic Republic.

A third of incumbents were barred from standing again. Moderates, who see disqualifications as a bid by hardliners to dominate the 2021 presidential race, say they had no candidates in the contest for 230 of the assembly’s 290 seats.

Parliament has no formal role over foreign policy, but it can intervene if Rouhani tries to engage in any talks with the US before a lifting of sanctions.

The Iranian foreign ministry believes US president Donald Trump has been gripped by a fantasy that the maximum economic pressure is going to lead to the Iranian regime’s fall. The election results, despite the low turnout, arguably show the regime’s power has been enhanced.

The foreign ministry are said to be 80 per cent certain that Mr Trump will be re-elected, and believe any prospect of progress on the nuclear deal is unlikely until after the US presidential elections in November. There is concern that the UK may break from its European partners France and Germany in the summer, ending its support for the deal.

Many Iranian voters said they would be willing to withstand another six years of sanctions for the sake of their country’s independence.

Figures such as Motahari defended the reformist-led parliament’s record, saying external bodies had blocked more than half of its legislation. He cited the parliament being excluded when the government suddenly doubled petrol prices in November, prompting state repression of street protests. He said parliament had wanted to impeach the interior ministry for its handling of the protests, but were ordered not to do so.