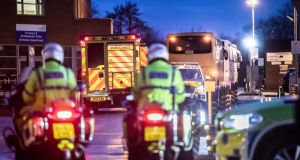 Coaches carrying passengers that have been repatriated to the UK from a cruise ship hit by the coronavirus in Yokohama, Japan, arrive at Arrowe Park Hospital on the Wirral, where they will be quarantined for 14 days to protect against the spread of the illness should any of them be infected. Photograph: Danny Lawson/PA Wire

Cases of the new coronavirus in Italy, the worst affected country in Europe, rose on Saturday to nearly 60, including two people who have died, and spread to the financial capital Milan.

Authorities in the northern regions of Lombardy and Veneto, where the outbreak is concentrated, have shut down schools and banned public events while companies from Ray-Ban owner Luxottica to the country’s top bank UniCredit have told workers living in the worst hit areas to stay home.

The first death was a 76-year-old woman who was found dead at her home 50km south of Milan on Thursday and tested positive for the coronavirus. A 78-year-old man died of the infection in a hospital near Padua on Friday night.

The man’s wife and daughter are among 12 people infected by the coronavirus in the Veneto region, where authorities are considering suspending Carnival of Venice events currently taking place.

Lombardy governor Attilio Fontana said patients in his region totalled 46, including a man currently at San Raffaele hospital in Milan. The city, where Women’s Fashion Week is underway, has a population of 1.4 million.

Organisers of the world’s biggest eyewear trade fair, MIDO, said on Saturday the coronavirus emergency had prompted them to postpone the event to the end of May. The fair had been due to take place in Milan in a week.

The outbreak originated in Codogno, a small town southeast of Milan where Lombardy’s first infected patient was treated.

That patient was a 38-year-old man, who fell ill after meeting a friend who had visited China. His condition has stabilised, authorities said.

“All those who have tested positive are people who on February 18th-19th had contacts with the emergency room and the hospital of Codogno,” Regional Health Councillor Giulio Gallera said, adding 259 people had been screened in the area in the past two days and 35 had tested positive.

“A contagion rate of 13 per cent is quite strong,” he said.

Some 50,000 residents in Codogno and nearby towns have been advised to remain indoors. Public gatherings including Sunday church services and football matches have been suspended, and schools and shops have been closed down.

Similar measures were adopted in the small Veneto town of Vo’ Euganeo where the male victim lived, and in various other places.

Italy was the first Eurozone country to suspend all direct flights to and from China, after two Chinese tourists from the badly hit city of Wuhan tested positive in Rome in late January.

The Chinese tourists and an Italian national repatriated from Wuhan were the only three cases in Italy until Friday.

In the UK, evacuees from a coronavirus-stricken cruise ship have signalled they are OK as they arrived in Merseyside to be quarantined.

The group, who were trapped on the Diamond Princess cruise ship off the coast of Japan for more than two weeks, were bussed to Arrowe Park Hospital on the Wirral on Saturday.

One passenger was pictured making a heart sign with her hands while another gave an OK signal through the coach windows as they pulled up just before 6pm.

The masked passengers – reportedly made up of 30 Britons and two Irish citizens – were split between three coaches along with medical professionals wearing white hazmat suits.

Two police cars, two ambulances, several police motorbikes and a fourth coach with no passengers were also in the convoy.

An accommodation block, separate to the main hospital building, will be home to the evacuees for the next fortnight as they undergo health checks in quarantine.

The passengers, who all tested negative to having Covid-19 before they flew, were brought back to the UK on a repatriation flight on Saturday.

The plane, which also carried British government and medical staff, touched down at Ministry of Defence base Boscombe Down in Wiltshire shortly after 11.30am.

Earlier on Saturday, authorities in Iran have reported a sixth death from the new virus that emerged in China.

The governor of Markazi province told the official IRNA news agency on Saturday that tests of a patient who recently died in the central city of Arak was positive for the strain of coronavirus known as Covid-19.

Ali Aghazadeh said the person who died was suffering from a heart problem, too.

Earlier on Saturday, Iranian health authorities reported a fifth death from the new virus and said the fatality was among 10 new confirmed cases of the virus in Iran.

It was not immediately clear whether the sixth fatality was among those 10.

So far, 28 cases have been confirmed in Iran, including at least five of the six who died.

South Korea has reported 142 more confirmed cases of coronavirus and the death of a second patient, a 54-year-old woman, as the jump in infections outside China raises alarm among global health officials who say the window of opportunity to prevent a pandemic is closing.

The majority of new cases in South Korea were linked to members of the Shincheonji religious sect, which now accounts for at least 160 of the country’s confirmed 346 cases. In China, authorities announced 109 more deaths and 823 fresh cases, while more than 2,000 patients were discharged from hospitals.

South Korea confirmed another 142 cases Saturday morning, 38 of which were related to a religious sect in Daegu, while 92 were in nearby Cheongdo county, where the funeral of the brother of the group’s leader took place earlier this month.

Health officials are examining ties between the Daegu church and Cheongdo. Yonhap News reported that tests have been completed on 9,336 Shincheonji Daegu church members and 1,261 showed symptoms of the virus.

The 54-year-old woman who died was suffering from chronic pneumonia and her condition worsened when she was being transferred to a hospital in Busan because of a lack of beds in Daegu and nearby cities, Yonhap said.