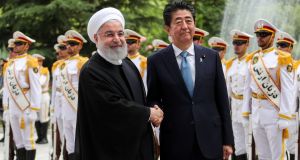 Japanese prime minister Shinzo Abe began a two-day visit to Iran on Wednesday as part of international efforts to reduce tensions between Tehran and Washington.

Abe’s trip to Iran is the first by a Japanese premier since the 1979 Islamic revolution and the first by a G7 leader since US president Donald Trump unilaterally withdrew from a landmark nuclear accord Tehran signed with world powers in 2015.

The visit comes amid fears that heightened tensions between the US and the Islamic republic risk triggering a conflict. Two weeks ago, Abe hosted Trump and discussed the crisis with him.

Japan is an important US ally and has historical business ties with Iran – it has traditionally been one of the biggest buyers of Iranian crude. Abe is scheduled to meet president Hassan Rouhani on Wednesday and, more significantly, hold talks with Ayatollah Ali Khamenei, the supreme leader and the republic’s ultimate decision maker, on Thursday.

“There are concerns over rising tensions in the Middle East,” Abe told reporters at Tokyo’s Haneda airport before his departure, Japan’s Mainichi Shimbun newspaper reported on Wednesday. “While the situation attracts the attention of the international community, for peace and stability in the region, Japan wants to play a role as much as it can.”

“To ease tensions, I’d like to have a frank exchange of views,” Abe added.

Abe’s visit has fuelled speculation that he is seeking to act as a mediator between Washington and Tehran, or at least a go-between. Any form of negotiations involving Iran – direct or indirect – would have to be authorised by Khamenei.

Japanese officials have played down the prospects of Abe acting as a mediator or carrying a message from Trump. But the premier discussed Iran with Trump on Tuesday, Yoshihide Suga, Japan’s chief cabinet secretary, told reporters.

All three Middle East states are close US allies and support Trump’s aggressive push to counter Iran’s regional influence, and his decision to withdraw from the nuclear accord.

A western diplomat said Tokyo’s view was that if Tehran and the Trump administration are going to talk at some point, there “needs to be somebody both parties can trust”. And while there is an acceptance that there is little chance of direct talks happening any time soon, Japan “could be a conduit for now”.

Suga told reporters this week that Tokyo wanted to “encourage Iran, a regional power, to move toward easing tensions”.

Abe’s trip is part of a wider diplomatic push, including visits by senior European politicians to Tehran. Heiko Maas, Germany’s foreign minister, held talks in the Iranian capital this week.

Helga Maria Schmid, a top EU foreign policy official leading bloc efforts to save the nuclear deal, is due to travel to Iran this week. She is also expected to visit the UAE, Oman and Qatar.

Concerns about the risk of conflict between the US and Iran rose last month after Washington deployed an aircraft carrier strike group, B52 bombers and 1,500 additional troops to the region, citing unspecified “escalatory” action by Iran. US officials have also said they suspect Tehran was behind sabotage attacks on four oil tankers, including two Saudi vessels, off the coast of the UAE.

Both sides have said they do not want a war. But diplomats fear that a “miscalculation” by one of the parties could spark a conflict.

Iranian officials worry that the Trump administration wants to use crippling sanctions to stoke popular unrest and create the conditions for regime change.

After last month’s spike in friction, Mike Pompeo, US secretary of state, said Washington would be willing to negotiate with Iran with “no preconditions”.

But Mohammad Javad Zarif, his Iranian counterpart, said this week that Tehran would only consider talks with the US if Washington gave it assurances that it was ready to offer concessions.

“First, they need to show us that reaching an agreement with the US will have some benefit or not and then they can ask for talks about any other deal,” he said.

In a sign of the region’s volatility, Saudi Arabia said on Wednesday that Yemen’s Houthi rebels fired a missile at Abha airport in the kingdom, injuring 26 people. Washington and Riyadh, which leads an Arab coalition fighting the Houthis in Yemen’s four-year war, accuse Iran of supplying weapons to the rebels, including missiles that have been fired at Saudi targets. Iran denies the allegations. Last month, the Houthis claimed responsibility for drone attacks on two oil pumping stations in Saudi Arabia.

The stand-off between the US and Iran was triggered by Trump’s decision last year to unilaterally withdraw from the 2015 nuclear agreement Tehran signed with world powers and impose sweeping sanctions on the republic.

Trump wants to pressure the Islamic regime to change its behaviour, accusing Tehran of using regional proxies to destabilise the Arab world and spread extremism. The US and its Arab allies, particularly Saudi Arabia and the UAE, and Israel also want Iran to curb its ballistic missile programme. – Copyright The Financial Times Limited 2019