Trump and Biden cross swords in early-voting state of Iowa

US election frontrunner calls president ‘an existential threat to America’ 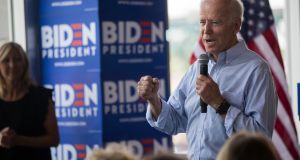 Tensions between US president Donald Trump and Joe Biden, the frontrunner to become the Democratic presidential nominee, erupted on Tuesday as both men campaigned in the early-voting state of Iowa.

In his first of a series of engagements across the state on Tuesday, former vice-president Biden lambasted Mr Trump, describing him as an “existential threat to America” and a “genuine threat to our core values”.

“Four years of Donald Trump will be viewed as an aberration in American history. Eight years will change what we are as a nation,” he said during a campaign event in Ottumwa, Iowa. “This is a guy who wants to separate and frighten people. It’s about fear and loathing.”

He also criticised Mr Trump’s attack on the media. Noting that the press was not always kind to him, he said the fourth estate was a crucial part of American democracy.

“We’re at a moment where I think we need to reinstate our constitutional norms in this country. The presidency is not without limits. It’s a coequal branch of government.”

Mr Biden’s comments – which had been widely trailed in the press ahead of Mr Trump’s arrival in the state for a separate series of events – prompted an angry response from the president.

Speaking to reporters as he left Washington for the midwestern state, Mr Trump dismissed the former vice-president as a “loser” who is “failing” and the “weakest mentally” among the Democratic candidates.

“I’d rather run against, I think, Biden than anybody,” he said. “I think he’s the weakest mentally and I think Joe is weak mentally. The others have much more energy.”

“I mean look, Joe never got more than 1 per cent. It looks like he’s failing, it looks like his friends from the left are going to overtake him very soon,” he said, explaining that he calls him 1 per cent Joe “because until Obama came along he didn’t do very well”.

Joe Biden has emerged as a secure frontrunner in the Democratic race to become the party’s nominee in the 2020 elections since he announced his candidacy in April.

Though he is leading in opinion polls, he has seen a slight dip in popularity in the last week. A Morning Consult poll on Tuesday showed that 37 per cent of Democratic primary voters supported Biden, a 1 per cent drop on the previous week. The same poll showed Massachusetts senator Elizabeth Warren gaining support, though she still remains behind Mr Biden and Senator Bernie Sanders.

A CNN-Des Moines Register poll at the weekend put his support much lower at 24 per cent. Tuesday’s visit by Mr Biden to Iowa marks only his second visit to the state since he announced his candidacy in April. Because Iowa is the first state to hold its caucus it plays an outsized role in the Democratic primary contest. Other candidates for the Democratic nomination have campaigned heavily in the state.

Mr Biden, who served for eight years as vice-president to President Barack Obama, is widely seen as the candidate best placed to take on Mr Trump in swing-states such as Michigan, Ohio and Pennsylvania which Hillary Clinton lost to the Republican nominee in 2016.

During his campaign appearances on Tuesday, Mr Biden hit out at Mr Trump’s trade policies and their impact on American workers and farmers. American workers are just a “pawn in his game”, he said of the US president.