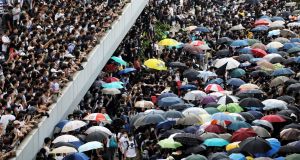 Hong Kong was rocked by political unrest on Wednesday as police used rubber bullets, tear gas, pepper spray, water hoses and bean-bag rounds to drive back thousands of protesters who blocked central roads and tried to storm the legislature.

The protesters surrounded the legislative council from early Wednesday morning, forcing the government to delay a session on a Bill that would allow suspects and fugitives be extradited to mainland China.

Commissioner of Hong Kong Police Steven Lo said they had “no choice but to use force”, adding that protesters had used bricks and sharpened iron bars to attack police officers.

Labelling the protest “a riot” he said, “we urge people not to do anything they will regret for the rest of their lives”.

Livestreamed reports from local television stations showed chaotic scenes as police with riot shields and demonstrators clashed. The clouds of tear gas were so thick they set off fire alarms in nearby buildings, and the gas was affecting people streets away from the government buildings. Some of the tear gas drifted into subway stations, panicking early evening commuters.

On Wednesday evening, the hospital authority said that 72 people involved in the protests were being treated for injuries, with at least two in a serious condition. A police spokesman said 21 police officers had been injured throughout the day with nine taken to hospital.

Earlier in the week Hong Kong’s chief executive Carrie Lam announced she was determined to put the Bill to the lawmakers again on Wednesday, despite an estimated million people taking to the streets on Sunday in one of the biggest protests since Britain handed the global financial hub back to China in 1997.

The government argues the new law is necessary to close a loophole and not allow Hong Kong to become a haven for fugitives, but critics fear it could leave people in Hong Kong snared in China’s opaque and arbitrary judicial system.

As tensions soared on Tuesday, the chief executive’s office said that several threatening phone calls had been made to their office, demanding that Ms Lam resign and quash the bill or her family would be burnt to death within 24 hours. Similar threats were made to the Secretary for Justice Teresa Cheng. Police said they were taking the threats seriously.

The proposed legislation has become a lightning rod for concerns that China is determined to erode freedoms and curtail any dissent in Hong Kong. Under the “one-country, two-systems” framework, Hong Kong citizens were guaranteed the right to retain the British legal and political systems for 50 years after the handover, but there is widespread belief in the territory that China has reneged on that deal, as well as its pledge to introduce meaningful elections.

So now Hong Kong has “one-country and one-and-a-half systems”, according to Umbrella Movement leader Joshua Wong, who is currently behind bars serving a five-week sentence. This is his second prison term for his role in the 2014 protests, last year he served more than three months in jail on a different unlawful assembly charge.

Speaking to The Irish Times last month before he returned to prison, the 22-year-old said the extradition law was truly the make or break issue for Hong Kong, “and we must fight. It is a really tough time for us… and if necessary we must pay the price”.

At a superficial level, Hong Kong appeared to be a modern, international and well-developed city, he said. “But apart from the sugar-coated impression towards people around the world, we are the ones standing on the frontline to confront Beijing’s oppression.”

Under the proposed amendments to the law, anybody in Hong Kong can be extradited to China, not only residents, but also visitors and people in transit, Mr Wong said.

“This will affect everyone. So I think the world should not keep silent. They should keep their eyes on Hong Kong.”

On Wednesday afternoon, to the delight of the protesters, the government announced they would be postponing the session to discuss the amendment. A new date has not yet been announced.

The People’s Liberation Army’s garrison is very close to the government buildings, and on the wall on Wednesday a protester had daubed in paint: “Anti-extradition to China. Fight the evil law”.

As the police and protesters clashed there were rumours circulating that the PLA would be deployed to clear the streets.

By late Wednesday night the atmosphere was calmer and protesters had been pushed back from the government buildings, but the mood was still very tense as thousands remained in the vicinity gathered in front of barricades facing off the riot police.

1 Prepare for six to nine months of Covid-19 restraints, warn health officials
2 Speed and distance of Covid-19 droplets tracked by Mater researchers
3 ‘Insane’ gathering of hundreds of students in Galway is condemend
4 Covid-19: Seventy cases in Cork traced to local pubs and restaurants in recent weeks
5 No joy for consumer with a faulty Husqvana chainsaw
Real news has value SUBSCRIBE