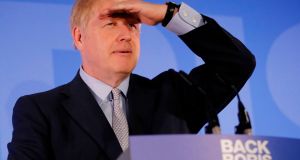 Boris Johnson delivers a speech during the launch of his campaign to become the next leader of the Conservative party in London on Wednesday. Photograph: Tolga Akmen/AFP/Getty Images.

British MPs opposed to a no-deal Brexit have failed in their latest attempt to seize control of parliamentary business in a bid to stop the next prime minister taking Britain out of the EU without a deal with Brussels.

The Commons voted by 309 to 298 to defeat a cross-party motion which would have given MPs control of the business of the House on June 25th.

The vote came after Tory leadership frontrunner Boris Johnson warned that MPs would “reap the whirlwind” if they tried to thwart Britain’s withdrawal from the EU.

For the British Labour Party, shadow Brexit secretary Keir Starmer said the move would have enabled MPs to prevent the next prime minister leaving without a deal.

Labour sources made clear they would try to find other parliamentary routes.

“This is a disappointing, narrow defeat. But this is just the start, not the end of our efforts to block no deal,” Sir Keir said.

“Labour stands ready to use whatever mechanism it can to protect jobs, the economy and communities from the disastrous consequences of a no-deal Brexit.

“Any Tory leadership candidate should know that Parliament will continue to fight against no deal.”

The motion was supported by the SNP, Liberal Democrats, Greens and Plaid Cymru as well as the Tory former minister Sir Oliver Letwin.

Meanwhile, Mr Johnson, the favourite to succeed Theresa May as British prime minister, has warned of “moral retribution” from British voters if parliament attempts to block Brexit.

As he launched his campaign to lead the Conservative Party on Wednesday, the former British foreign secretary said he would not pretend delivering Britain’s EU departure would be plain sailing, but insisted a “sensible, orderly” Brexit was achievable.

He said delaying Brexit further beyond the current October 31st deadline was not an option as “delay means defeat”.

Mr Johnson led the official campaign to leave the EU but has been criticised about the veracity of some of the claims he made ahead of the 2016 referendum.

On Wednesday he praised the strength of the British economy and promised to tackle despair across the UK.

“After three years and two missed deadlines, we must leave the EU on October 31st,” he said as a heckler yelled “Bollocks to Boris” from outside the Royal Academy of Engineering in central London.

“I am not aiming for a no-deal outcome,” said the 54-year-old former London mayor. “I don’t think that we will end up with any such thing, but it is only responsible to prepare vigorously and seriously for no-deal. Indeed it is astonishing that anyone could suggest dispensing with that vital tool in the negotiation.”

Mr Johnson has won over many in his party by arguing that only he can rescue the Conservatives by delivering Brexit.

“We will simply not get a result if we give the impression that we want to go on kicking the can down the road and yet more delay,” Mr Johnson said. “Delay means defeat, delay means ruin.”

“Around the country there is a feeling of disillusion and even despair at our ability to get things done. The longer it goes on, the worse the risk that there will be serious contamination and a real loss of confidence.”

Asked if he had ever broken the law, Mr Johnson spoke about driving above the speed limit. When asked about whether he had dabbled in illegal drugs, he dodged the question.

“Have I ever done anything illegal?...I cannot swear that I’ve always observed a top speed in this country of 70 miles an hour.”

Asked about a 2007 interview in which he said he had tried cocaine, Mr Johnson said the public wanted to focus on the issues and “all the rest of it, frankly, is I think in danger of blowing us off track”.

Another Conservative leadership hopeful, environment secretary Michael Gove, has been widely criticised during the campaign over his admission of having used the drug in the 1990s.

The Conservatives suffered their worst result in centuries in a European Parliament election last month. Opinion polls indicate a snap election would produce a hung parliament, with neither the Conservatives nor Labour winning a majority.

Just minutes before Mr Johnson spoke, finance minister Philip Hammond said he did not think Johnson, if he won the top job, would be able to take Britain out of the EU by October 31st.

The EU has refused to renegotiate the Withdrawal Agreement reached with May last November, and Ireland has indicated it is not willing to change the Border “backstop” that has upset the DUP, which props up Mrs May’s minority government.

Mr Johnson has been criticised for hiding “in a bunker” by some of his opponents, but the strategy to reduce the media exposure of a man who has been prone to gaffes and scandals seems to be working, with his support so far holding up.

He made his name as an EU-bashing journalist in Brussels before entering politics. He also raised his profile through a series of appearances on a television comedy show. He upset some Europeans before Britain’s Brexit referendum by comparing the EU’s goals with those of Hitler and Napoleon. – PA