Former vice-president still ahead but Sanders, Warren and Buttigieg close the gap 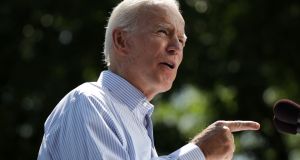 On the heels of a major Iowa poll which showed a big slip in his big lead over the Democratic field, Joe Biden was conspicuous by his absence from the guest list of a big party event in the state on Sunday.

Nineteen candidates for the presidential nomination are due to attend the Democratic Party Hall of Fame event in Cedar Rapids. Mr Biden, attending his granddaughter’s graduation, is not among them. He is due to visit Ottumwa, Iowa, on Tuesday – the same day Donald Trump will visit Council Bluffs and Des Moines.

In the poll, released by CNN and the Des Moines Register on Saturday night, the former Delaware senator and vice-president led the 23-strong Democratic field in the early voting state by eight clear points. But he only polled at 24 per cent support, down from his usual support of more than 30 per cent.

The Vermont senator Bernie Sanders was second with 16 per cent, ahead of Massachusetts senator Elizabeth Warren with 15 per cent and Pete Buttigieg, the mayor of South Bend, Indiana, with 14 per cent. The California senator Kamala Harris was the only other candidate to poll above 5 per cent, with half as much support as Buttigieg.

The former Texas congressman Beto O’Rourke and the Minnesota senator Amy Klobuchar were the only other candidates to get more than 1 per cent support among likely caucus participants. Both attracted 2 per cent.

Mr Biden’s campaign has so far focused on states where he polls strongly against Mr Trump, including his native Pennsylvania and the post-industrial “rust belt” where the president beat Hillary Clinton on his way to victory in the electoral college.

In an interview with the Guardian published on Sunday, Bruce Haines, a hotelier, former steel executive and Trump supporter from Northampton county, Pennsylvania, summed up the main issue of contention in Democratic ranks nationwide.

Should the party pick a progressive with bold policy ideas, such as Sanders, Warren or Buttigieg, or should it opt for Biden, a centrist with high name recognition in blue-collar states away from the liberal coasts?

“So I think support [for Trump] is going to strengthen as we get closer to the election,” Mr Haines said. “And as we sort out who he’s going to run against - will it be a socialist, or will it be Biden?”– Guardian