John Dean, whose testimony against Richard Nixon was a turning point during the Watergate scandal, has told a US congressional hearing that Robert Mueller has provided "a road map" to investigating Donald Trump. Video: C-Span/The White House 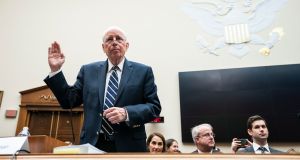 John Dean, former White House counsel in the Nixon administration, is sworn in before testifying at a House judiciary committee hearing about the Mueller report on Monday . Photograph: Jim Lo Scalzo/EPA

Democrats stepped up their pressure on US president Donald Trump over the Mueller investigation on Monday, summoning John Dean, the White House counsel during the Nixon administration, to testify before the House judiciary committee.

Mr Dean, whose testimony against Nixon in the 1970s was a turning point during the Watergate scandal, told the committee that he believed that Don McGahn, Mr Trump’s legal counsel during much of his presidency, should testify.

“In many ways the Mueller report is to president Trump what the so-called Watergate road map . . . was to president Richard Nixon, ” Mr Dean said, highlighting in particular Mr Trump’s alleged offers of pardons to potential witnesses in the investigation.

Asked by Republicans what the point of the committee hearing was, Mr Dean replied: “Public education. This report has not been widely read in the United States, it has not even been read in the Congress. ”

Mr Dean is the first of several witnesses being summoned by the committee’s chairman, Jerry Nadler, to testify before it as Democrats continue their investigations into matters related to the Mueller report. Robert Mueller submitted his final report on his 22-month investigation in March. While he found no evidence of collusion between the Trump campaign team and Russia, he did not make a judgment on whether the president had obstructed justice. Any move to impeach Mr Trump would begin in the House judiciary committee.

Mr Trump attacked Mr Dean ahead of his committee appearance, calling him a “sleazebag”.

“Can’t believe they are bringing in John Dean, the disgraced Nixon White House Counsel who is a paid CNN contributor. No Collusion – No Obstruction! Democrats just want a do-over which they’ll never get!” he tweeted shortly before Mr Dean was due to appear.

Opening the committee hearing, Mr Nadler said that while Mr Mueller had found no evidence of collusion, “he did, however, document at least 171 contacts between members of the Trump campaign and transition team and the Russian government”. He also noted that the special counsel describes 10 separate incidents in which Mr Trump tried to change the scope or direction of the investigation or to end it altogether.

“Today’s hearing is the first in a series of hearings designed to unpack the work of the special counsel and related matters,” he said. “We have a responsibility to do this work, to follow the facts where they lead.”

But Republicans on the committee questioned why Mr Dean was appearing, with congressman Jim Jordan reading several statements and tweets by Mr Dean that were critical of Mr Trump.

Shortly before Mr Dean’s appearance, the committee announced that it had reached a deal with the justice department to secure access to some redacted portions of the Mueller report. As a result the committee is expected to postpone a vote on holding attorney general William Barr in contempt of Congress over his refusal to testify before it and to provide certain documents to key committees.

Announcing the agreement with the justice department, Mr Nadler said Mr Mueller’s “most important files” would be released to them. “These documents will allow us to perform our constitutional duties and decide how to respond to the allegations laid out against the president by the special counsel,” he said.

Meanwhile, Mr Trump hit out at the Federal Reserve again in a wide-ranging interview with CNBC on Monday morning where he defended his handling of trade relationships with China and Mexico.

“[China] devalue their currency, they have for years – it’s put them at a tremendous competitive advantage. And we don’t have that advantage because we have a Fed that doesn’t lower interest rates,” he said. “Our Fed is very, very disruptive to us.”