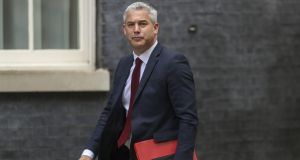 Boris Johnson’s promise to take Britain out of the EU with or without a deal on the scheduled Brexit date of October 31st has been undermined by a confidential cabinet note warning that the country is still far from prepared for the disruption of a disorderly exit.

The note, seen by the Financial Times, says the government needs six to eight months of engagement with the pharmaceutical industry “to ensure adequate arrangements are in place to build stockpiles of medicines by October 31”.

It also says that it would take “at least 4-5 months” to improve trader readiness for the new border checks that might be required, including the provision of financial incentives to encourage exporters and importers to register for new schemes.

Mr Johnson, the frontrunner to become the next Conservative party leader and prime minister, launches his campaign on Wednesday. He will insist that the UK cannot “go on kicking the can down the road with yet more delay” over Brexit.

But the cabinet note confirms that any new prime minister would find it very hard to conclude preparations, especially on medicines and border controls by October 31st.

The foreign office, according to the note, would need “at least a two-month period” to communicate with more than 1m UK citizens living in other EU countries and to allow them to prepare for the uncertainty around their future status.

The note, prepared for cabinet on May 21st, said that while government departments had delivered around 85 per cent of their “core no-deal plans”, many of those provided only “a minimum viable level of capability”.

Of the remaining plans that had not been delivered, the note says the shortcomings in government readiness were “material”.

The presentation to cabinet was drawn up with input from Steve Barclay, the Eurosceptic Brexit secretary, who has been frustrated by the government’s failure to accelerate its preparations for a no-deal exit.

The note was never circulated for the cabinet discussion on May 21st because Theresa May was concentrating at the time on her ultimately failed bid to push through the legislation on her deal with the EU. After that attempt collapsed, the prime minister announced her plans to resign.

A spokesman from Mr Barclay’s department said on Wednesday that the government would “absolutely continue to make all necessary preparations” after spending almost three years preparing to minimise the disruption of no-deal. He added that the government had published 750 pieces of no-deal communication since October and held 700 “cross-government stakehold engagements” this year.

The cabinet returned to no-deal planning this week, with Sajid Javid, home secretary, claiming that chancellor Philip Hammond was holding back on spending money because of his fierce opposition to a no-deal exit.

The chancellor argued he had given Mr Javid’s department £500 million in April and was surprised it had already spent that money. Mr Javid then wrote to Mr Hammond asking for a further £1 billion for border preparations for a no-deal exit.

Mr Hammond is blamed by Tory Eurosceptics for holding up the preparations necessary for a British exit on October 31 without a formal withdrawal treaty.

But after two previous delays to the Brexit date, Mr Johnson advocates leaving the EU on schedule, whether Britain agrees a deal or not.

“Now is the time to unite this country and unite this society, and we cannot begin that task until we have delivered on the primary request of the people; the one big thing they have asked us to do,” he will say at his campaign launch on Wednesday. “After three years and two missed deadlines, we must leave the EU on October 31.”

Labour will on Wednesday afternoon lead a cross-party Commons move to block a no-deal exit; the party wants to seize control of the parliamentary order paper to legislate – if necessary – to stop a new prime minister taking Britain out of the EU without a withdrawal agreement.

Mr Barclay’s allies admit that he is frustrated by the government’s “confusing” position on no deal, which has meant that the private sector has failed to properly prepare for such an outcome.

One person close to Mr Barclay said: “Steve has been making the case for a ramp up of no-deal spending for weeks. The government has a responsibility to prepare and it’s crucial we don’t waste this time in improving our readiness.”

Downing Street said it would not comment on leaks. – Copyright The Financial Times Limited 2019