44 small graves stir questions about US policy in Yemen 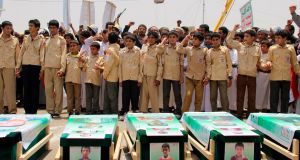 Yemeni children vent anger against Riyadh and Washington on August 13th during a mass funeral in the northern Yemeni city of Saada for children killed in an air strike by the Saudi-led coalition last week. Photograph: AFP/Getty Images

The boys crammed into the bus, their thin bodies packed three to a seat, with latecomers jammed in the aisle. They fidgeted with excitement about the day’s field trip, talking so loudly that a tall boy struggling to get their attention put his hands over his ears and yelled.

Hours later, most of them were dead. During a stop for snacks in the poor village of Dahyan in northern Yemen, an air strike by the Saudi-led coalition of Arab nations hit nearby, blasting the bus into a jagged mass of twisted metal and scattering its human cargo – wounded, bleeding and dead – in the street below, according to witnesses and parents.

“My leg is bent,” cried a young boy covered in blood, examining his damaged limb. “A jet hit us,” he said in a video taken at the scene after the air strike. Yemeni health officials said 54 people were killed, 44 of them children, and many more were wounded.

Yemen’s conflict began in 2014 when Houthi rebels, who are aligned with Iran, seized control of the capital, Sanaa, and sent the government into exile. In March 2015, Saudi Arabia – Iran’s chief rival for power and influence in the Middle East – formed a coalition of Arab nations and launched a military intervention aimed at restoring Yemen’s government. It has so far failed to do so.

The August 9th attack was particularly shocking, even for a war in which children have been the primary victims, suffering through one of the world’s worst humanitarian crises, with rampant malnutrition and outbreaks of cholera. The war had killed more than 10,000 people before the United Nations stopped updating the death toll two years ago.

The strike also revived questions about the coalition’s tactics and the United States’s support for the campaign. American military leaders, exasperated by strikes that have killed civilians at markets, weddings and funerals, insist the United States is not a party to the war. Human rights organisations say the United States cannot deny its role, given that it has sold billions of dollars in weaponry to allied coalition states, provided them with intelligence and refuelled their bombers in mid-air.

Congress has shown increasing concern about the war recently. A defence policy Bill that President Donald Trump signed on Monday included a bipartisan provision that requires secretary of state Mike Pompeo to certify that Saudi Arabia and its close ally the United Arab Emirates – the two countries leading the coalition – are taking steps to prevent civilian deaths.

If Pompeo cannot provide the certification, the legislation prohibits the American refuelling of coalition jets. Pompeo raised the bus attack by phone this week with Crown Prince Mohammed bin Salman of Saudi Arabia, the kingdom’s defence minister. And defence secretary Jim Mattis dispatched a three-star general to Riyadh, the Saudi capital, to press the Saudis to investigate the bus bombing.

In the wake of this attack, individual members of Congress have gone further, calling on the military to clarify its role in air strikes on Yemen and investigate whether the support for those strikes could expose US military personnel to legal jeopardy, including for war crimes.

At the same time, however, the defence contractor Raytheon has lobbied lawmakers and the US state department to allow it to sell 60,000 precision-guided munitions to Saudi Arabia and the United Arab Emirates in deals worth billions of dollars.

The Saudi-led coalition says it works to avoid civilian casualties and accuses its enemies, the Houthis, of using civilians as human shields. The day of the strike, the coalition’s spokesman, Col Turki al-Malki, said coalition forces had hit a “legitimate military target” after a Houthi missile killed one person and injured 11 in southern Saudi Arabia, which borders Yemen.

“All of the elements that were in the bus were targeted,” Malki told the Saudi-owned Al Arabiya network, saying they included “operators and planners”. The next day, the coalition said the bombing had been referred for internal investigation after reports that “a bus was subject to collateral damage”.

Human rights groups say they doubt the coalition would find itself at fault in any investigation. “The Saudis aren’t learning,” said Larry Lewis, a former state department official who visited Saudi Arabia five times in 2015 and 2016 to help the country’s air force improve its targeting procedures and investigations. “They’re making the same mistakes they’ve been making all along. And we are not pressing the issue. We are letting them get away with it.”

A visit to the site of the attack, interviews with witnesses and a review of videos from the day painted a picture of the strike’s human cost. The boys on the bus ranged in age from six to about 16, and most were from Dahyan, a poor village in Saada province along the border with Saudi Arabia. The province is the homeland of the Houthis, and the coalition has bombed it heavily.

For their part, the Houthis have used the area to launch attacks on the Saudi border and to fire missiles into the kingdom. The boys had been part of a religious summer programme organised by the Houthis, and the field trip was meant to be a treat.

When they packed into the bus that morning, one boy, Osama al-Humran, filmed his classmates squirming in their seats with his mobile phone. Many were wearing sport coats over their Yemeni gowns, dressed up for a special occasion. The video then shows them at their next stop, a memorial and graveyard called the Garden of the Martyrs in a nearby village. In a large hangar decorated with photos of men killed in the war, a man led the boys through prayers and chants. A sign next to the door bore the Houthis slogan: “God is great. Death to America. Death to Israel. Curse the Jews. Victory for Islam.”

Some of the boys giggled when Osama filmed them or put their hands over his camera. Then they ran into the adjoining graveyard, where grass grew on rows of graves marked with white headstones or plastic signs bearing photos of the deceased. “I am filming!” Osama yells as he walks among the graves.

Two other boys stand next to a fountain and he calls out, “Come here so I can take your picture.” There, the video ends.

The bus was supposed to continue to Saada, the provincial capital, for a visit to a historic mosque. But it never made it. The group had stopped along the way to buy juice and snacks when the bomb hit. Ali Abdullah Hamlah, a local bakery owner, said he heard the explosion and saw a huge cloud billow from the site before seeing a young man covered in blood dragging himself away. Hamlah approached and saw the bodies of seven children scattered around.

“In some cases, only the upper bodies of the kids were found,” he said. The mangled body of one child was found on the roof of a building, propelled by the force of the blast. Videos shot in the aftermath show the demolished bus with the lifeless bodies of two boys on the floor. Other boys are on the ground nearby. Some struggle to move. Others are dead and eviscerated, their remains mixed up in the street with the detritus from the explosion.

“It was the first time in my life that I have seen such a horrific massacre,” Hamlah said. Among the dead was Osama, the boy who had filmed his classmates. His videos were found on his phone after the bombing, according to Yahya al-Shami, who works for the Houthis’ Al-Maseera television station, which broadcast the images. Parents of boys on the bus confirmed the day’s programme and that their children were in the video.

A few days later, local security officials showed the New York Times a metal fin they said had been attached to the bomb and had been found nearby. Writing on the fin indicated it was manufactured by US corporation General Dynamics and had been attached as a guidance system on a 500-pound bomb. The Times could not confirm that the fin was from the bomb used in the strike.

But the remnants of US-made weapons have frequently been found in the rubble of air strikes in Yemen. Trump administration officials say they have no control over the bombs that Saudi Arabia and the United Arab Emirates buy commercially from American or other western defence contractors. Pentagon officials say they have repeatedly offered assistance to both countries on creating “no strike” lists, but they are not involved in picking targets and do not know the missions of the coalition warplanes that the United States refuels.

At a nearby hospital, Abdul-Rahman al-Ejri comforted his 11-year-old son, Hassan, who was wailing from the pain of a broken leg. He had been on the bus and his father was enraged that the coalition had said it carried military plotters.

“This is the mastermind, along with his companions,” Ejri said sarcastically. “How can they plot anything? They’re kids and only armed with pens, notebooks and books.”