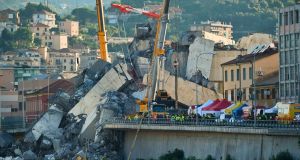 As shock gave way to anger over the bridge collapse in Genoa, Italians reflected on the randomness with which the victims were selected. Within the flow of traffic doomed by the collapse were families, a nurse and an anaesthetist, a lorry driver, a chef. There were Italians, foreign workers and tourists.

Among the 39 confirmed dead were two families. Roberto Robbiano ( 44), Ersilia Piccinino (41) and their eight-year-old son, Samuele, from Campomorone, in Genoa province, were reportedly on their way to lunch with relatives in Voltri when the bridge came down.

A friend of the family told La Repubblica he arrived at the scene at about 1pm and recognised their car, as well as a Spider-Man ball that Samuele played with.

Members of a second family, from Milan, were named as Andrea Vittone (59), Claudia Possetti (48) and two children from Possetti’s previous marriage, Camilla (12) and Manuele (16).

Alberto Fanfani, a 32-year-old anaesthetist who worked in Pisa, was travelling with his girlfriend, Marta Danisi (29), from Sicily, when the bridge collapsed. Dario Nardella, the mayor of Florence, confirmed Fanfani’s death via Twitter.

Danisi, a nurse, was yet to be officially named among the victims, although Bruno Mancuso, the mayor of her hometown, Sant’Agata di Militello, confirmed her death to local media, citing relatives.

“I am shocked and saddened by the tragedy that has struck somebody from our town,” he said. “On behalf of all the community, we express our deepest condolences and solidarity with her family over this immense pain and emptiness that has hit them.”

The couple are believed to have been making their way towards the northern city of Alessandria, to where Danisi was said to have recently transferred for work. Friends of Elisa Bozzo (34) who was travelling in a black Opel car, launched a social media appeal for her whereabouts shortly after the accident.

Andrea Cerulli (47) died while making his way to work at Genoa port. Mirko Vicini (31) and Bruno Casagrande (35) who had been unemployed for months before finding seasonal work with Amiu, a waste management company, were in a van at a recycling centre beneath the bridge when they were killed.

Marjus Djerri and Edy Bokrina were travelling in a van owned by EuroPulizia, a services company, and were on their way to work in Rapallo. Their bodies were retrieved from the rubble in front of their parents and wives.

The bodies of four people from Torre del Greco, near Naples – Giovanni Battiloro (29) Matteo Bertonati (26), Gerardo Esposito (26) and Antonio Stanzione, (29) – were also found in the wreckage. The group had been on their way to Nice and then Barcelona.

Gennaro Sarnataro, a 43-year-old lorry driver from Naples, was travelling back from France when he died. Other victims named on Wednesday morning included Carlo Erazzo Trujillio (27) and Stella Boccia (24) a couple from Arezzo in Tuscany; Luigi Matti Altadonna (35) from Borghetto Santo Spirito, in Liguria; Francesco Bello (41), Sandro Campora (53), Giorgio Donaggio, a businessman from Savona, and Henry Diaz, a 30-year-old Colombian living in Liguria.

Also confirmed dead was Vincenzo Licata, a 58-year-old transport company boss from Grotte, in Sicily. He leaves behind a wife and two children. Alfonso Provvidenza, the mayor of Grotte, said: “The tragedy has deeply affected the entire community.”

The Italian media named foreign victims, including a group of French tourists who had been making their way to Genoa port to catch a ferry to Sardinia. They were identified as William Pouzadoux (22) from Lyon, Axelle Place (19), from Tarn, and Nathan Gusman and Melissa Artus-Bastit, both from Toulouse.

Also named was Juan Carlos Pastenes, a 64-year-old chef originally from Chile who had lived in Genoa for more than 30 years. He was travelling with his wife, Nora Rivera, and friend, Juan Figueroa (58), at the time of the bridge collapse.

Rescuers worked under floodlights throughout the night searching for survivors. Four people were pulled alive from the rubble in the hours after the accident but on Tuesday, the search went on.

“All accessible spaces have been explored; now we are moving the largest pieces of debris,” Emanuele Gissi, a fire official, told Agence France-Presse. “We cannot know if there are survivors remaining, but it’s our job to search.” – Guardian