Turkish standoff: US pastor Brunson a victim of ‘hostage diplomacy’

May 16th, 2017 | US president Donald Trump opens talks with Turkish president Tayyip Erdogan amid tensions over the US decision to arm Kurdish fighters in Syria. video: Reuters 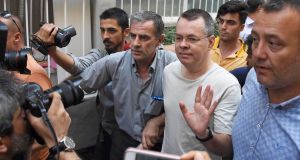 US pastor Andrew Brunson arrives at his home in Izmir, Turkey, after being released from prison into house arrest in July of this year. The move was allowed on the grounds of ill health, according to Turkish authorities. File photograph: Demiroren News Agency/DHA via Reuters

For more than two decades, American pastor Andrew Brunson lived a quiet life in Izmir. Every Sunday, he preached to a Presbyterian congregation of about two dozen people at the modest Izmir Resurrection Church in the city centre. Himself, his wife and three children had made the city in western Turkey their home.

Brunson (50), from North Carolina, could never have thought he would find himself at the centre of a major diplomatic impasse between Washington and Ankara, the fallout from which has, in part, pushed Turkey’s economy to the brink.

Turkey was in the midst of a massive purge of suspected opponents of the ruling AK Party when Brunson attempted to renew his residency visa in October 2016.

Three months earlier, more than 250 people had been killed during a botched coup attempt, and the aftermath saw president Recep Tayyip Erdogan turn the full brunt of his power on all suspected opponents, imprisoning tens of thousands of people.

Brunson, who had been helping Syrian refugees and attempting to build a new church at the time, was detained at Izmir’s immigration department. He was later accused of involvement with terrorist groups, including helping the outlawed Kurdish PKK militia and the Gülen organisation, which Turkey blames for orchestrating the failed coup.

“My service that I have spent my life on, has now turned upside down,” he told a court in May. “I was never ashamed to be a server of Jesus, but these claims are shameful and disgusting.”

International human rights groups have condemned his detention. Brunson denies the charges, which carry a sentence of up to 35 years in prison.

Brunson’s case mostly flew under the radar until US-based evangelical leaders managed to get his predicament in front of top White House officials last spring.

US president Donald Trump directly addressed Brunson’s case on July 26th, declaring in a tweet: “The United States will impose large sanctions on Turkey for their long-time detainment of Pastor Andrew Brunson, a great Christian, family man and wonderful human being.”

Erdogan shot back, telling the US not to interfere in its internal affairs. But the sanctions came on August 1st when the US Treasury department imposed an asset freeze on Abdulhamit Gul, Turkey’s minister of justice, and Suleyman Soylu, the interior minister.

Ankara threatened an “equivalent response”, and on Tuesday, Erdogan announced Turkey would boycott US electronic products. That followed additional US sanctions on imports of Turkish steel and aluminium last Friday that threatened to send international financial markets and Turkey’s already-flailing economy into crisis mode over the weekend.

Ankara has long been angered by Washington’s refusal to extradite Fethullah Gülen, the cleric living in self-imposed exile in Pennsylvania whom Turkey claims was behind the coup – an allegation he denies.

Such is the political motivation behind Pastor Brunson’s detention that Erdogan twice publicly offered to release him in exchange for the handing over of Gülen. As the spat has escalated, however, Erdogan has backed away from that possibility, claiming instead it is up to Turkey’s judicial system to decide Brunson’s fate.

By many accounts, Brunson’s trial hearings have been little short of farcical. The pastor was held for almost 18 months before he was charged and his case heard in court. When several defence witnesses were called by Brunson’s lawyer to give testimony in May, the presiding judge refused to hear them.

Brunson’s health was believed to have deteriorated amid sweltering prison conditions before he was placed under house arrest last month. On Tuesday, his lawyer filed an appeal to have him released from house arrest and his travel ban lifted, though a similar move was previously refused. The next trial hearing is set for October 12th.

Ankara and Washington remain important Nato allies, but the positions taken by both countries could see ties degenerate further. With the US-backed fight against Islamic State in Iraq and Syria all but finished, Washington no longer relies on its Incirlik military base in southern Turkey, as it has in previous years.

All the while, an economic crisis many Turks have long seen coming has arrived, and Turkey’s leaders are looking for scapegoats in the form of so-called foreign conspirators.

A victim of “hostage diplomacy” between two of the world’s foremost alpha political leaders, Brunson may find his fate is not decided for some time.

Erdogan is unlikely to back down from the hardline rhetoric he has used to castigate the US, while for Trump, resolving the Turkish impasse is not a pressing political concern, as made clear by his postponing of the sale of F-35 fighter jets to Turkey on Sunday.