Westminster attack suspect is identified as a British citizen

A man was arrested after appearing to drive into cyclists before crashing outside UK parliament. The man, in his 20s, injured three people as he drove through a group of cyclists and pedestrians before hitting a barrier. Video: BBC 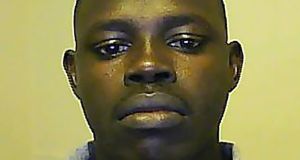 Salih Khater, believed to be the suspect in the Westminster crash. Photograph: Facebook 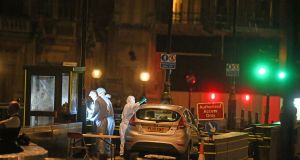 Forensic officers by the car that crashed into security barriers outside the Houses of Parliament in Westminster, London, on Tuesday. Photograph: Victoria Jones/PA Wire

Police are continuing to question a man over a suspected terrorist attack in Westminster, London, after the investigation went nationwide with raids on addresses in Nottingham and Birmingham.

The 29-year-old man was arrested on suspicion of preparing an act of terrorism after a silver Ford Fiesta was driven into cyclists travelling around Parliament Square on Tuesday morning. He is understood to be Salih Khater, a British national who lives in the Sparkbrook area of Birmingham and is of Sudanese origin.

On Wednesday police said he had been further arrested on suspicion of attempted murder. Counter-terrorism officers have also been granted a warrant to detain him until Monday.

Khater told members of the Sudanese community he was travelling to London to obtain a visa to visit his homeland, officials at a Birmingham mosque said.

Scotland Yard said the suspect, who has not been officially named, was not known to the security services and was not co-operating with investigating officers, but owing to the crash appearing to be deliberate and the location it was being treated as a suspected terrorist attack. He has not been charged.

The car travelled to London from Birmingham on Monday night and spent the time between about 1.25am and 5.55am in the Tottenham Court Road area, before moving to Westminster and Whitehall at about 6am. It remained there before the incident an hour and 40 minutes later, police said.

Two Birmingham addresses in the Sparkhill area were searched on Tuesday in connection with the incident. Police said on Wednesday that a third address in Birmingham was being searched. On Wednesday morning, two plainclothes policemen officers were at the Bunna internet cafe on Stratford Road in Sparkhill.

Neighbours said the police arrived on Tuesday afternoon to search the flat upstairs, where Khater is thought to have lived. A man working in the cafe said he had moved out four months ago.

Ahmed Abdi (43), sitting at the internet cafe next door, said Khater would smoke shisha at the Bunna internet cafe every day. “He was very quiet – always smoking shisha and looking at his phone,” he said. He said Khater drove a small, old white car.

The Nottingham Post reported that the car involved in the incident was registered to an address in Nottingham. The current owner of the vehicle bought it on June 20th this year.

Nottinghamshire police said they were supporting counter-terrorism officers as they searched a residential property in the Radford area of the city. The address is thought to be a flat on Peveril Street. Neighbours said it was home to six Sudanese people.

Both Cressida Dick, the Metropolitan police commissioner, and Sadiq Khan, the mayor of London, suggested that Parliament Square could be pedestrianised, at least in part, to prevent similar attacks in future.

Speaking ahead of unrelated dawn raids in southeast London, Ms Dick said: “You will notice that the security around parliament both in terms of armed officers and police officers and physical barriers has been further enhanced over the last several months and there is more to come on that in further months.

“Whether that area outside should be pedestrianised further, there should be further physical works done, I think is a matter that will be discussed no doubt between parliamentary authorities, us, the intelligence agencies and indeed the local authorities and the mayor.”

She added: “Sadly the vehicle appears to, in some ways when you look across Europe and the western world, have become a weapon of choice, method of attack of choice for terrorists, and devastation can be caused by a vehicle, as we’ve seen so many times.”

Mr Khan told the Today programme on BBC Radio 4 that countermeasures against “hostile vehicles” could be built unobstrusively into the urban environment. He said he was in favour of a part-pedestrianisation of Parliament Square, immediately outside the gates of parliament.

“I have been an advocate for some time now of part-pedestrianising Parliament Square, but making sure we don’t lose the wonderful thing about our democracy, which is people having access to parliamentarians, people being able to lobby parliament [and] visitors being able to visit parliament,” he said.

Despite the calls for further fortifications, Mark Rowley, former assistant commissioner for specialist operations at the Met, who also appeared on Today, said that security arrangements had mitigated the effects of Tuesday’s incident.

“This person was driving around for some time,” Mr Rowley said. “He didn’t find a weak spot and ends up doing a fairly chaotic attack which fortunately only resulted in injuries, not in death. The physical protection around parliament worked very well and the police response was brilliant, quick and massively careful, given the risk that they were rushing into.”

Kirsty Moseley (31), one of the closest witnesses to the attack, told the Guardian the driver did not shout or say anything as the car collided with as many as 15 cyclists, and he appeared “focused”.

CCTV footage showed the car swerving across a central reservation near Parliament Square and then accelerating down St Margaret Street before crashing into barriers. Pedestrians were seen leaping out of its path.

Two men and one woman were injured in the crash. One was treated at the scene and two were taken to hospital and eventually discharged. – Guardian